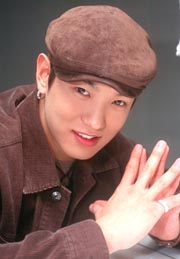 Hwanhee, a former member of Korean R&B duo Fly to the Sky, has taken an abrupt break from work on his debut album due to health problems.

The singer made his solo debut in October with the release of the songs “Because I Missed Your Heart” and “Bring it Back.”

H Entercom, Hwanhee’s managing agency, reported on Tuesday that “Hwanhee has been having problems with his vocal cords and has been receiving treatment for the past three weeks. Doctors recommended that he take a break.”