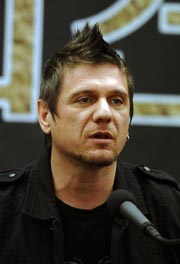 The U.S. metal band Steelheart is returning to Korea for the first time in 12 years.

A representative for the band made the announcement at a press conference held at the Korea Press Center on Tuesday. The group will perform at Millennium Hall in Banpo-dong and V Hall near Hongik University on Feb. 27 and 28.

The group had their first concert here in 1998 and were scheduled to return to Korea as part of an Asian tour in September but concerns about the H1N1 virus postponed the tour.

Miljenko Matijevic, Steelheart’s lead vocalist said that he is “excited to return to Korea, a country that still remembers and loves our songs.”

The singer reported that his “Korean friends have told him that there are Koreans who know She’s Gone, even if they don’t know the band’s name.”

The concert will feature tracks from their soon-to-be-released album “Good 2B Alive,” which they will be playing for the first time.