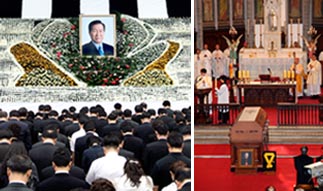 
Korea’s 16th president, Roh Moo-hyun, jumped off a cliff in his hometown on May 23 amid a prosecution investigation into a bribery scandal, becoming the first Korean president to commit suicide. The predecessor of incumbent President Lee Myung-bak was accused of receiving at least $6 million from Park Yeon-cha, a Busan-based businessman and longtime patron. Roh left a note saying, “Don’t feel sorry. Don’t blame. It’s destiny.” Hours later, prosecutors wrapped up their probe.

The social repercussions were immense. Hundreds of thousands of citizens crowded into makeshift mourning altars across the country over several days of mourning before Roh’s official funeral. Anti-government protests ensued.

Korea lost two other spiritual leaders in religion and politics this year: Cardinal Stephen Kim Sou-hwan in February and the former president Kim Dae-jung in August. After the death of Cardinal Kim, who was widely respected among Catholics and others alike for fighting for minorities and taking a key role in the nation’s democratization, the whole country was gripped with grief. During a three-day mourning period, more than 400,000 people visited Myeongdong Cathedral to pay tribute. The late former president Kim was the country’s first Nobel Piece Prize winner for his lifelong efforts to promote democracy and for seeing through the first inter-Korean summit meeting with North Korean leader Kim Jong-il in June 2000. During his six-day state funeral, about 750,000 people visited 184 temporary mourning altars located across the nation.

North Korea conducted a nuclear test in May, further harming an inter-Korean relationship that had already been worsening under the conservative Lee Myung-bak administration in Seoul. South Korea joined the international community in condemning the action and in applying tough sanctions on the North, which responded by declaring the stalled six-party talks “dead.” The prospects for improvements in inter-Korean relations appeared bleak. Then the roller-coaster ride began. In August, North Korea agreed to resume a suspended tourist program at the Mount Kumgang resort and in September the two Koreas staged the first reunion of separate families in two years. But November brought a naval clash on the west coast, the first in seven years, when a North Korean ship crossed the sea border. The North’s ship was badly damaged, but Pyongyang warned in December that the South should stay away from the area near the sea border it had set. 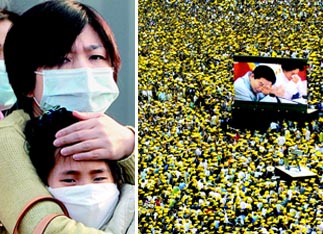 Just a month after the first death from influenza A(H1N1) was reported in Mexico in April, the first fatality from the illness was reported in Korea in May. The death toll from the pandemic later rose, though not as catastrophically as some had feared. Still, government-designated hospitals for A(H1N1) influenza treatment were packed with patients and visitors with symptoms. Flu fears forced the cancellation of large public events, led to the temporary closure of schools across the country and caused delays at airports as incoming international passengers were made to sign health forms and have their temperatures taken. According to the Korea Centers for Disease Control and Prevention, over 2.8 million people had been infected with the virus and 187 had died from it in Korea as of Dec. 28. After raising its alert level to red, the highest, on Nov. 3, the Health Ministry finally lowered it back to orange on Dec. 1. It was the first time Korea had used the red level since it adopted the four-phase alert system in August 2006 to respond to avian influenza.

Controversy over Sejong City, the new administrative hub, reignited this year after the Lee Myung-bak administration made public its decision to overhaul the project.

First proposed by Roh Moo-hyun as a presidential candidate in 2002, the plan has been the center of a political storm ever since. The current administration said the idea of relocating most government ministries to the site in South Chungcheong had to be revised because of its inefficiency, and the new concept focuses on science, education and business, with the aim of creating a city with a population of 500,000 by 2030.

The decision has prompted splits even inside the ruling Grand National Party. In November, President Lee issued a public apology on live TV for having backed the original plan ahead of the election two years ago. Despite persistent opposition from sections of the political community, Prime Minister Chung Un-chan said in December that the revised blueprint will be finalized by the end of January. 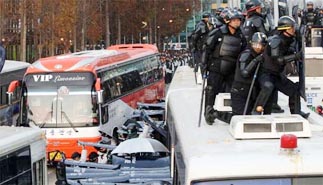 It was a memorable year for sports fans, but two names stand out: Kim Yu-na and Yang Yong-eun.

Kim, 19, was a perfect five for five in global competition this year. She also set new scoring records, three times in the short program, once in free skating and twice in total points.

Yang, 37, grabbed headlines for his improbable comeback against Tiger Woods at the PGA Championships at the Hazeltine National Golf Club in Chaska, Minnesota, in August. In becoming the first Asian male golfer to win a PGA major event, Yang handed Woods his first loss at a major event at which he led the pack heading into the final round of play. The win was one of the biggest upsets in golf history, but the former body builder garnered wider attention due to his late start in the sport and humble background.

The nation was whipped up into a frenzy after the rape of an 8-year-old child known as Na-young was featured on a current affairs television show on Sept. 22. The public was outraged at the 12-year jail sentence given to the 57-year-old rapist Cho Du-sun, saying the sentence was too light.

Legal measures and public support for victims of sex crimes have been reinforced since. The government introduced a new law extending jail sentences and introducing electronic anklets in October this year. The Supreme Court said on Dec. 21 that it is considering issuing additional penalties to sex criminals who use alcohol in their assaults on children. Public funds for helping child victims were created and medical doctors organized a sex crime task force. 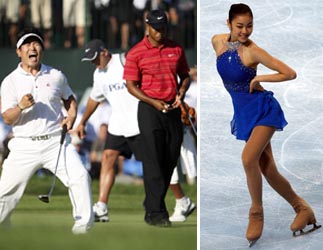 Korea was named in September as the host of the Group of 20 summit in November 2010, as the heads of state agreed in Pittsburgh to shift the main body for coordinating economic policy from the G8, the club of developed economies, to the G-20, which also includes major emerging economies.


Free trade progress with EU, India
Korea and Europe in October signed a preliminary agreement on free trade, wrapping up negotiations that had lasted for more than two years. The agreement will give Korea access to the 27-nation economic bloc, expected to increase trade by around 40 percent. The biggest beneficiaries of the pact will be exporters, including the automotive and electronics industries. The agreement may also lend momentum to other talks, especially with China and Japan.

The comprehensive economic partnership agreement with India sealed in August was also another major economic achievement. Once enacted next year, Korea will have access to one of the world’s biggest markets, provoking a rise in GDP growth of 0.2 percentage point or roughly $800 million. 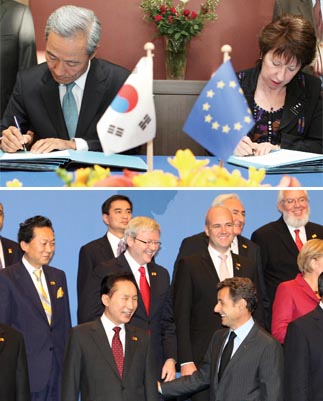 A slate of media reform bills dominated National Assembly discussions for the better part of the year. The revision would allow a newspaper or business group to invest in a broadcaster starting in 2012, provided that the paper’s readership is below 20 percent of the market and that the conglomerate’s assets are less than 10 trillion won ($8.5 billion).

In July, the ruling Grand National Party managed to pass the bills amid pandemonium in the main chamber. One of the bills passed despite not meeting a quorum for voting. In October, the Constitutional Court ruled that the laws were valid but that the voting process had violated lawmakers’ rights. The media laws took effect Nov. 1.