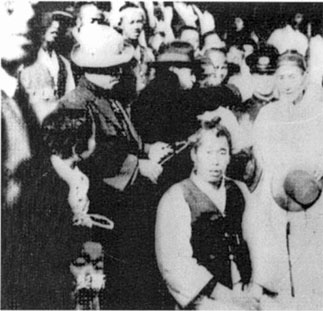 “I will cut off my topknot and serve as a role model for the people. You should honor my wishes and do your utmost to achieve a great feat for the whole nation.”

Gojong, the last king of the Joseon Dynasty (1392-1910), imposed an order on the people to cut their long hair on Dec. 30, 1895, less than three months after the tragic assassination of Empress Myeongseong by a gang of Japanese criminals.

The order was completed via a Japanese adviser.

Even some ministers who led the pro-Japanese cabinet at the time took a position contrary to the order, fearing that the new policy would be met with strong resistance from the people.

The main unanswered question is why did Japan push him on this issue?

Inoue, the mastermind behind the Eulmi Incident, told Japanese Prime Minister Eisaku Sato several days prior: “We find it difficult to reform Joseon. There is a high possibility that a grassroots rebellion, such as the Donghak Peasant Revolution, will occur again before long. Therefore, we need to mobilize the Japanese army soon.”

The order to cut topknots and the brutal assassination of Queen Myeongseong were mean tricks played by the Japanese to hurt the pride of the Korean people and induce resistance movements in a bid to give Japan a reason to bolster its forces and gain control over Joseon.

The righteous army of Eulmi raised on Jan. 27, 1896, fought hand-to-hand against the Japanese army.

However, as King Gojong’s move to the Russian Legation on Feb. 11, 1896, brought Russian influence to his side, Japan failed to achieve its goal.

Yun Chi-ho, a politician of Korea’s enlightenment period, wrote on Dec. 26, 1895: “The reason the Japanese people compelled us to shave off our topknots is to bring benefits to Japanese hat sellers and clothiers. We are in a position to save a nation in imminent peril. Then why do you hesitate to spare a fistful of hair? The king should stand at the forefront to inform the people of the order to shave off their topknots and set an example for others to follow.

“Although it is the royal command, we should each choose whether to follow it. Although you can kill people, their justice cannot be destroyed. Although our head is cut off, we can never be deprived of justice.”

Confucianist Choi Ik-hyun - in response to a recommendation to cut his topknot by Yu Gil-jun, who himself cut the topknot of the king - said he would rather have his head cut off.

From today’s perspective, the order is seen as a reformative measure used to cope with the historical trends that those challenging times required. However, we miss the noble people who did not hesitate to sacrifice their lives for the sake of their values.