Wigan’s Cho goes back to the Bluewings

Wigan’s Cho goes back to the Bluewings 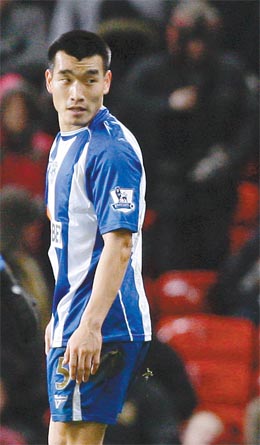 Cho Won-hee is set to return to his former K-League club, the Suwon Bluewings, after a 10-month stint in the English Premier League with Wigan Athletic.

The 27-year-old midfielder signed a 30-month deal with the English club in late February last year. He returns to the Bluewings on a one-year loan.

In announcing the loan agreement yesterday, Suwon officials stated they were looking to bolster their lineup for the upcoming season and their run in the AFC Champions League. Suwon manager Cha Bum-kun was said to have actively pursued Cho of late.

Since joining Wigan, Cho has made just five appearances, with four appearances in 19 games. Although Cho will have approximately six months remaining in his contract with Wigan at the end of his year with Suwon, it is highly unlikely that the defensive midfielder will return to the English club.

The biggest reason for Cho’s return to the K-League is playing time. With the 2010 World Cup fast approaching, the defensive midfielder needs to log more playing time to showcase his skills. National team manager Huh Jung-moo had stated on numerous occasions that he will not hesitate to exclude from the 23-man roster players who are engaged abroad if the player was not getting significant playing time with his respective club. Huh’s use of young center midfielders like Ki Sung-yeung meant that Cho needed to secure his place on the national team in the final six-month stretch leading up to the World Cup in June.

Another reason for Cho’s return was the managerial change at Wigan. The manager who took interest in Cho last season, Steve Bruce, signed with Sunderland in the offseason. With the hiring of Roberto Martinez, things began to change for Cho. Martinez added midfielders Hendry Thomas of Honduras and Mohamed Diame of France, resulting in a decreased role for Cho. Thomas appeared in 18 matches this season and Diame in 15. Despite Cho being a defensive midfielder, Martinez was said to have required Cho to play more of an offensive role in the club. During his entire stay with Wigan of approximately 10 months, Cho started two matches and appeared in three matches as a substitute.

Cho appeared in his last match for Wigan in a Dec. 31 game against Manchester United, playing the entire 90 minutes. The team lost 5-0.