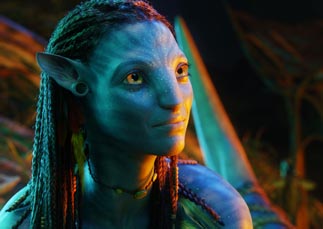 James Cameron’s blockbuster made 352 million dollars in the U.S. as of Sunday, according to weekend estimates. Provided by Fox Korea

LOS ANGELES - Hollywood blockbuster “Avatar” surged to a box office haul of more than $1 billion globally on Sunday, faster than any other movie in history, an industry tracker reported.

“It has made $670 million international, for a total of more than $1 billion,” box office analyst Chad Hartigan of Exhibitor Relations told AFP.

Since the Fox-distributed film - the most expensive ever made at up to $500 million - debuted 17 days ago, it has earned $352 million domestically as of Sunday, according to weekend estimates, assuring its reputation as one of the most impressive box office performers of all time.

“It was the fastest ever to the $1 billion mark,” and “‘Avatar’ is now the third biggest grosser ever,” behind “Titanic” and “The Return of the King,” the final movie in the Lord of the Rings trilogy, Hartigan said.

The film tells the story of a paralyzed war veteran, Jake, who is sent on a mission to the planet Pandora, where he falls in love with a blue humanoid named Neytiri of the alien Na’vi race.

The figure smashed the previous best weekend mark of $260.3 million set in July 2008, when Batman blockbuster “The Dark Knight” opened to huge audiences in Canada and the United States.