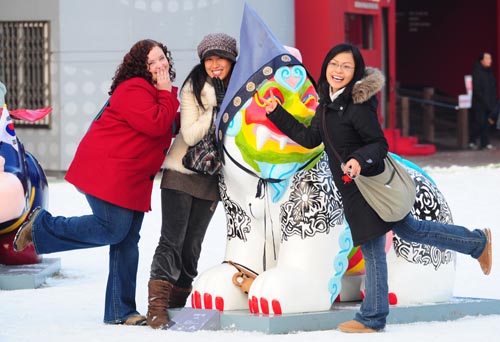 Tourists pose with a piece of artwork in Seoul Plaza over the weekend. [NEWSIS]

Tourism organizations are starting the new year with an ambitious resolution. Their mission is simple and not so impossible - or so they believe. The goal is to attract as many as tourists to the country as possible through a campaign they are calling “2010-2012 Visit Korea Year.”

On New Year’s Eve, Culture Minister Yu In-chon said he hopes to make Korea “a country that attracts friends from all over the world.” The next day, Yu, along with Lee Charm, president of the Korea Tourism Organization, went to Incheon International Airport to personally welcome the year’s first inbound tourists at the arrival gate. 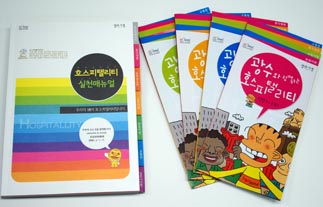 The Seoul Metropolitan Government distributed materials to companies in the service industry last month ahead of the “2010-2012 Visit Korea Year” that describe hospitality practices for foreign tourists. Provided by the government

Although the gesture of greeting guests at the airport is nothing new, the move reflects one of the key points on the Korean government’s “to-do list” this year: increase the annual number of foreign visitors to 8.5 million, from the current 7.8 million. It is all part of the Culture Ministry’s larger plan, announced in November, to increase the number of inbound travelers to Korea by nearly three times to 20 million by 2020.

The only question now is whether the Korean government will be any more successful at keeping its resolution than those who vow to quit smoking or exercise regularly at the beginning of a new year, only to go back on their promises as the year goes on.

Although market watchers worry that uncertainties like a weak won and other favorable economic conditions still linger and that they could factor negatively in tourism sector, few would argue that Korea’s chances are higher than ever.

In addition to the 2010-2012 Visit Korea Year campaign, the government is supporting other events to increase tourism. In October, Yeongam County in South Jeolla will be the venue for Formula One, or F-1, the world’s most prestigious car racing competition, and in November, Seoul will be the gathering point for world leaders as the host of the G-20 economic summit.

To prepare, Korea seems to have been doing its homework.

Last year, it launched a host of committees that will work on assessing and improving Korea’s image abroad. These include the Presidential Branding Council, Task Force for Korean Cuisine and Visit Korea Committee.

The committees are getting some very high-profile help from First Lady Kim Yoon-ok. She serves as honorary chairwoman of the latter two committees. She also cooked Korean food on CNN, made kimchi with Miyuki Hatoyama, wife of Japan’s new prime minister Yukio Hatoyama in October, and selected the menu for U.S. President Barack Obama in November.

All of these efforts provide the country with opportunities to promote itself, but there are also challenges.

First and foremost, there is the issue of the slogan. The slogans “Dynamic Korea” and “Sparkling Korea” have not proven very popular thus far. Euh Yoon-dae, chairman of the Presidential Branding Council, lamented that “a recent survey shows that only 20 percent of respondents supported those slogans.”

While most agree on the need for a better slogan, officials are still undecided over what that will be.

There is also a rivalry between Korea, Japan and China. Next year is “Visit China Year” and “Visit Japan Year” in those countries. But some people, such as Lee Charm, say this presents the three countries with an opportunity, and he has even suggested a “Visit East Asia” campaign.

Now that it’s showtime, we’ll see if all of these efforts will help the Korean government keep its resolution as the year goes on.