‘Plaza’ a misnomer in downtown

‘Plaza’ a misnomer in downtown

Seoul has a mixed history with “plazas.” When the city government unveiled Seoul Plaza in front of City Hall back in 2004, it didn’t expect the grass-covered oval to become a favorite rallying point among protesters and civic groups. But for more than 100 days in summer 2008 it was packed with crowds demonstrating against the resumption of U.S. beef imports in candlelight vigils.

Afterward the city clamped down on the space, surrounding it with police buses whenever there was a chance it could be filled with protesters, creating a vivid symbol of the debate over who has the right to use public spaces, and for what purposes.

Yet the city is now grappling with similar problems - along with a few new ones - in Gwanghwamun Plaza, which opened Aug. 1.

At a cost of 45.7 billion won ($41.5 million), the plaza was meant to become a new symbol of Seoul. But some experts have said a messy design has kept it from fulfilling its stated goals, and after a barrage of criticism, the metropolitan government conceded that there were problems at a recent press conference, agreeing to hold discussions with experts and the public early this year to decide what to change or add to Gwanghwamun Plaza. 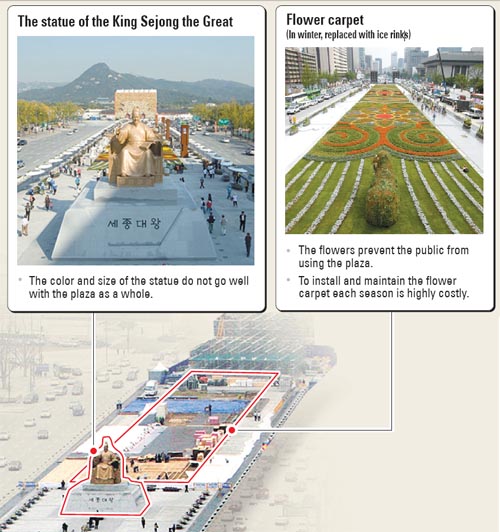 In a recent survey of 21 experts in design, engineering and the arts, all unanimously agreed that Gwanghwamun Plaza is in need of changes. Eighteen said design was very problematic, and 15 had questions about the place’s identity.

“Do you think it’s a plaza? It should be called a garden,” said Park Seung-kyu, author of “Everyday Geography” and a professor at the Chuncheon National University of Education.

In Spain, the classical plaza is the center of public life, a city’s religious, judicial and administrative heart and a place where citizens can gather freely on foot.

However, it’s hard to see in Gwanghwamun Plaza anything of the friendly, cobblestoned squares of Europe.

Making matters worse, the narrow strip is 550 meters (1,804 feet) long but only 30 meters wide - hardly a “square” - and it houses two large statues, one of Admiral Yi Sun-sin, placed there in April 1968, and one of King Sejong the Great, created for the opening of the plaza last year. The two statues are placed about an eight-minute walk apart with Admiral Yi standing in front of a seated Sejong, blocking the view of Gyeongbok Palace and Mount Bukak from downtown.

The many disparate elements crowding the site have also come in for criticism. Two fountains sit below Admiral Yi’s feet, along with lights, flower beds, waterways, planter pots that also function as sun shades and a few historical artifacts. 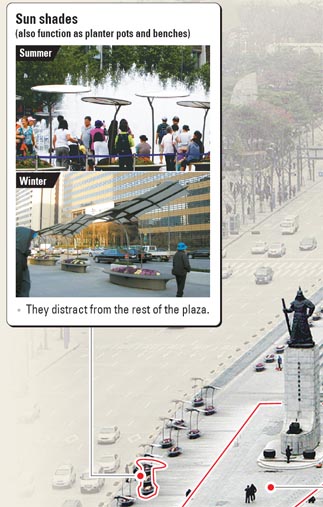 On a recent visit to the plaza, a glass booth housing a special exhibition featuring artist Paik Nam-june’s “Fractal Turtle Ship,” almost as big as the nearby statue of Admiral Yi, had also been installed and a ticket box placed behind it, while 18 Christmas trees lined the plaza with accompanying decorations. In an open place in front of the statue of King Sejong, eight black boxes about the size of ordinary street stalls had been scattered around, embedded with light-emitting diodes for a winter event. Behind the statue of Sejong, ice rinks, ticket booths and a skate rental shop had taken the place of the flowers.

The stated purpose of building Gwanghwamun Plaza in the first place was to reproduce Yukjogeori, the street where six government offices were located during the Joseon Dynasty (1392-1910), but it’s hard to find traditional Korean touches in the design of the modern version.

“In a word, Gwanghwamun Plaza needs to go on an extreme diet,” said Kim Seung-hoe, an engineering professor at Seoul National University.

Citizens have exhibited mixed reactions to the plaza. “I think it’s good to take a walk after lunch while sipping coffee,” said Park Mi-yeon who was found strolling around the plaza with her two co-workers.

But one woman in her 50s out on the same day said, “I don’t feel safe because vehicles keep running next to me, and there are too many installations here. It’s just distracting and messy.” 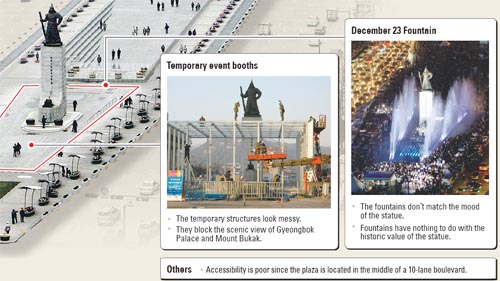 There is a purpose behind all the small objects scattered across the plaza, however: to control protesters.

The Seoul Metropolitan Government has admitted that it was worried about Gwanghwamun Plaza’s likeness to Seoul Plaza and about experiencing similar problems with activists. The National Policy Agency estimated that anti-U.S. beef demonstrations at Seoul Plaza caused damage totaling around 517.9 million won, including medical fees and repair costs, so the Gwanghwamun site was deliberating filled with installations to keep mobs from forming.

“I know the Gwanghwamun Plaza lacks an identity as a plaza because we placed many items to prevent people from demonstrating there,” confirmed one Seoul city official who wanted to remain anonymous. “We can’t get rid of all the fountains, lights and other items, but I agree that the plaza should be redesigned in some ways.”

Also, in the last four months, more than 200 events have taken place at the site, meaning it’s never been empty enough for citizens to gather unofficially.

Most notably, Gwanghwamun Plaza hosted the FIS Snowboard World Cup Big Air Competition on a conspicuous jump ramp installed immediately in front of Gyeongbok Palace. In order to put in the ramp, Seoul cleared away flowers that originally cost 470 million won to install.

The city said the competition would be “effective in promoting Seoul,” but critics have pointed to the waste in removing the flowers and the apparent danger of snowboarding in the middle of a major thoroughfare.

Kim Young-keol, head of the balanced development team at the metropolitan government, responded, “The competition was aired in more than 100 countries on ESPN and other popular sports channels, so we think hosting such events is a good thing.”

Those on the ground may not see those promotional benefits, however.

“This is one of the most notorious areas for traffic jams,” snapped Kim Seong-hong, a 53-year-old taxi driver waiting next to the plaza. “I don’t understand why the city causes more chaos by making a plaza here. Do you think you can take a break with so many honking cars and so much smoke?”

Problems to be solved

“If Seoul wants to make a plaza able to become a symbol of this city, it should refrain from forcing the issue. And it has to remember that less is more in terms of design,” said Jeong Ki-yong, engineer and professor at Sungkyunkwan University.

“A place where the public can voluntarily get together, make their voices heard and rest is the genuine meaning of a plaza,” Jeong said.