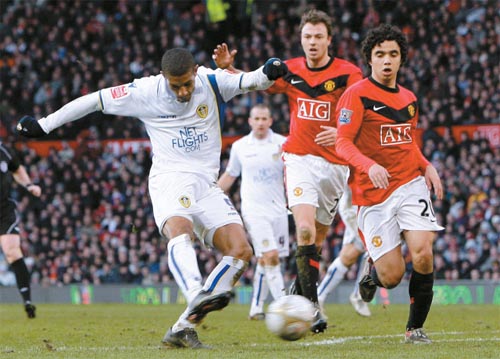 LONDON - Third-tier Leeds United produced the shock of the third round by knocking record 11-time winners Manchester United out of the FA Cup with a 1-0 victory at Old Trafford on Sunday.

Leeds, the League One leaders who are 43 places below English champions Manchester United, won thanks to Jermaine Beckford’s 19th-minute goal and will now face Tottenham in the fourth round.

Arsenal, who has lifted the FA Cup 10 times, were themselves 12 minutes away from a third round exit against Premier League and London rivals West Ham after Alessandro Diamanti had put the hosts ahead on the stroke of halftime. But two goals in five minutes from teenage midfielder Aaron Ramsey and striker Eduardo stunned the Upton Park faithful as Arsenal won 2-1 to set up another all Premier League Cup clash against Stoke.

FA Cup holders Chelsea, who lead the Premier League by two points from Manchester United, cruised through with a 5-0 thrashing of second division Watford at Stamford Bridge and will now be away to another Championship team, Preston North End. The defeat was the first time Manchester United manager Sir Alex Ferguson had lost in the third round since he arrived at Old Trafford 24 years ago and marked United’s first exit at this stage since losing to Bournemouth in 1984.

“The preparation for the game was very good, but I’m shocked by the performance,” said Ferguson. “We didn’t start right and Leeds did start right. They fought like tigers, and we expect that with any team coming to Old Trafford for an FA Cup tie. It’s a disappointment.”

This loss was not what United wanted ahead of Wednesday’s League Cup semifinal, first leg, tie against local rivals Manchester City and Ferguson said: “We have to get this result out of our system as quickly as possible.”

Leeds manager Simon Grayson hailed his “outstanding” side after they produced one of the great FA Cup shocks. “Full credit to the players who were outstanding today but it’s what they’ve been like all season,” he said.

Chelsea were 3-0 in front by the 22nd minute thanks to Daniel Sturridge, a John Eustace own-goal and Florent Malouda’s deflected shot. England midfielder Frank Lampard made it 4-0 in the 64th minute with a 25-yard strike and four minutes later 20-year-old striker Sturridge had his second and Chelsea’s fifth goal.

Chelsea manager Carlo Ancelotti was particularly pleased by the performance of Sturridge. The young forward’s goals were his first for the Blues since a pre-season move from Manchester City and were timely as Chelsea are currently without in-form striker Didier Drogba because of the Ivory Coast international’s African Nations Cup commitments.

“It was a good performance and Sturridge played very well,” said Ancelotti. “Without Drogba, it is important to have him in good condition.”

“In the second half we played at a higher tempo, West Ham dropped a bit physically and we could make the difference in the final 20 minutes.” West Ham manager Gianfranco Zola added: “We were very close, I am pleased with the performance of the team. I couldn’t ask for anything more.”

Sunday’s all second-tier Championship clash between Sheffield United and QPR ended in a 1-1 draw. Jay Simpson gave QPR the lead but it lasted just six minutes, with Richard Cresswell equalizing for the Blades.

Premier League Wolverhampton won 1-0 away to third-tier Tranmere in Sunday’s late kick-off thanks to Matt Jarvis’ 77th minute goal and will be at home to Championship side Crystal Palace in the fourth round.