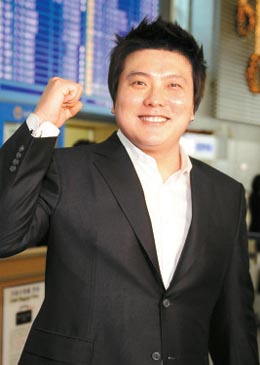 Kim Tae-kyun, who is set to enter his rookie Nippon Professional Baseball season with the Chiba Lotte Marines, left for Tokyo yesterday morning and will join a training camp with Lotte’s minor league team on Thursday.

“I got noticed at the World Baseball Classic and was able to sign with an NPB club as a result. I will try my best to live up to those expectations,” Kim, 28, told local media at Incheon International Airport yesterday.

“Since it’s my rookie season in the NPB, I have set a moderate goal for the upcoming season. However, I feel responsible for producing runs as the team’s cleanup hitter and will drive in 80 to 90 runs.”

Kim’s overall goal is eventually to reach Major League Baseball after a successful stint in the NPB.

“It is important to produce in Japan in order to make the move to the U.S. I hope to avoid injuries and play up to my capabilities in my rookie season,” added Kim.

The first baseman had planned on training on his own in downtown Chiba in preparation for next season, but once he got word that the club’s minor league team would be training in a suburb of their home city near Tokyo, Kim immediately decided to join in.

He will train with the minor leaguers for a week, and starting on Jan. 15 will train on his own at Chiba Marine Stadium. League rules prohibit NPB players from training with each other prior to the start of spring camps in February, but players are allowed to work on their own in preparation for the group sessions.

“I pondered the option of delaying my departure because of a hectic schedule but came to the decision that it would be better to join the minor league team training,” Kim said. “I heard players can train on their own at the Marines Stadium starting on Jan. 15. I think it will help my training if I have others around.”

Kim spent the month of December taking a well-deserved break after a roller-coaster year. After a strong showing at the World Baseball Classic in March, Kim suffered a concussion early in the KBO season. But then came the three-year mega deal worth 700 million yen ($7.6 million) with the Chiba Lotte Marines on Nov. 13.

After spending some quality time with friends and family, Kim said he has focused on his game since the start of the new year. The player packed his belongings and left his home in Daejeon for Seoul on Jan. 2.

“Other than some clothes, I didn’t have many things to pack. Since I have to live alone, a robot vacuum cleaner was one of the first items that I packed,” said Kim with a laugh.

“I’ve always taken December off to relax and trained hard in January. There is no reason to stray from my routine just because I’m going to Japan. I will train and prepare for the upcoming season the way I’m accustomed.”

The Chiba Lotte Marines start their spring training camp on Feb. 1 in Kagoshima and begin playing spring exhibition games at the end of the month.

Meanwhile, Kim recently hired the entertainment agency of DoMa-ENT to represent him. The office is run by the singer Noh Tae-hyeon, a friend of Kim’s, and comedienne Kang Nam-young.

Despite having received better offers from other agencies, Kim said he decided to trust his friend.

“I don’t know exactly what management firms do. I will focus solely on playing baseball,” he said with a smile.