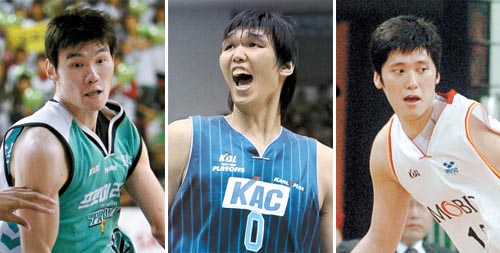 Nearly half of the Korean Basketball League season is on the books, and Kim Joo-sung of Dongbu Promy, Ha Seung-jin of KCC Egis and Ham Ji-hoon of Mobis Phoebus are in contention for the season’s Most Valuable Player honor.

Kim is ninth overall in scoring and leads the group with 16.4 points per game. Ha leads the league in rebounds with 9.8 per game, while Ham is an all-around player who is averaging 15.5 points, 4.2 assists and 7 rebounds per game.

Kim is Dongbu’s center, and his numbers - averaging 16.4 points, 3.6 assists and 6.4 rebounds per game - measure up admirably to overseas players. Dongbu currently sits in fourth place in the KBL, with a record of 20 wins and 12 losses, and Kim is an integral part of that accomplishment.

“Kim is an intelligent player,” assessed Samaki Walker of the SK Knights, giving a thumbs up. “He knows how to position himself. He doesn’t run much, nor does he attempt too many shots, but [he] contributes points. He is also an excellent defensive player.”

Bryant Dunston and Aaron Haynes of Mobis also tagged Kim as the best player in the league. Dunston described Kim as the best all-around player, while Haynes lauded Kim for his intelligence on the court and ability to lead his team.

But Chris Daniels of the KT&G Kites went with Ham for his defensive abilities, and thought Kim could stand to improve his defensive game.

Daniels wasn’t the only one to praise the third-year center as Korea’s top talent. Ham slightly trails Kim in scoring with 15.5 points per game, but his 4.2 assists and 7 rebounds is even better than the veteran center. Undersized at 200 centimeters (6 feet 5 inches), Ham uses solid positioning and strength to contain his opponents in the paint. He also added a mid-range jump to his arsenal this season.

“I have yet to see another player with his height dominate the post,” said Amal McCaskill of the ET Land Elephants.

Chris Alexander of thee LG Sakers agreed. “He is strong and his movement in the post is the best by far.”

Having won the top rookie honor last season, Ha is another solid candidate. By far the tallest in the league, Ha is listed at 221 centimeters (7 feet 2 inches) and averages 14.6 points, 9.8 rebounds and 1.8 blocks per game. The sophomore center posts double-double in scoring and rebounds on a regular basis.

Herbert Hill and Anthony Johnson of the Daegu Orions both tabbed Ha as the season’s MVP for possessing the size and the skill set necessary to dominate in the low post.

“I have been watching him since last season and I see improvement in his game,” said Donald Little of KT&G. “I’m sure he will be back in the NBA in the near future.”