Step into the whimsical world of pop artist James Rizzi

Step into the whimsical world of pop artist James Rizzi 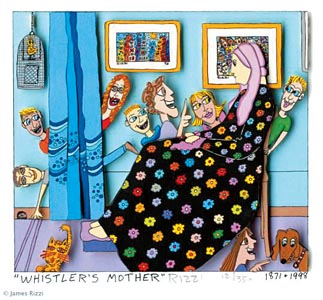 If Andy Warhol is the only name you know in pop art, add James Rizzi to your list. Whereas Warhol uses bold and flamboyant lines in his paintings, Rizzi’s creations are more whimsical and lighthearted.

The work of the New York-born pop artist will be presented for the first time in Korea at the Uijeongbu Arts Center in Gyeonggi.

“Rizzi received a decent art education, but his pieces lead people to think otherwise because they look like children’s drawings,” said Lee So-yeon, the curator who organized the exhibition. “For that reason, Rizzi is considered an outsider in the art world. People think he’s not academic compared to Warhol or other pop artists. But that shows that Rizzi is a genuine pop artist because he produces popular works that anyone can find attractive and enjoyable.”

Rizzi uses multiple media to create his work, blending drawing, printmaking and sculpture to make works that are three-dimensional.

Some of the Rizzi’s works also reflect the influence of artists such as Pablo Picasso, Paul Klee and Jean Dubuffet.

Among the many works on display are pieces that parody famous paintings such as the “Mona Lisa” and “The Scream.”

Under Rizzi’s touch, the Mona Lisa is born again as a funky character, and Munch’s Scream is cute and funny. Instead of the gloomy tone of “Whistler’s Mother,” Rizzi’s rendition is light and warm.

In his New York series, Rizzi depicts the life and times of the city where he grew up. The series is in some ways reminiscent of the “Where’s Waldo?” children’s books by British illustrator Martin Handford. Hundreds of people with all of their different facial expressions are captured in works such as “All Roads Lead to N.Y.C.” and “Love and Liberty is My Big Apple.”

Rizzi leads an active artistic life that extends beyond the canvas. He teamed up with German carmaker Volkswagen to design the exterior of the New Beetle in 2006, and he designed the exterior of a Boeing 757 in 2004.

He was also chosen as the official artist of the FIFA World Cup in 1998 and the Switzerland-based Montreux Jazz Festival in 1997. His drawings have also appeared on a series of stamps distributed by Deutsche Post in 2008.

The bright colors and comic book nature of Rizzi’s work makes it appealing to children, which has led several school groups to create projects based on the art works.