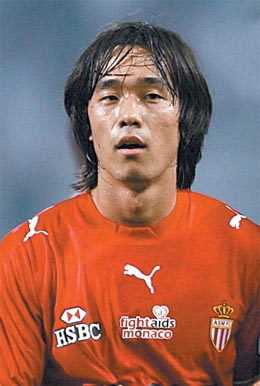 Fans of AS Monaco FC have selected Park Chu-young as the team’s player of the month for December. According to an announcement on the team’s Web site yesterday, an overwhelming 77 percent of votes went to Park, with Sebastien Puygrenier receiving 10 percent of and Stephane Ruffier, 7 percent.

“Park Chu-young was selected as the player who made the biggest impact last month,” the announcement read.

In the month of December, Park played in five league matches and scored in three of them consecutively. The team, which plays in the French Ligue 1, got off to a slow start last month with lopsided losses to Valenciennes FC (3-1) on Dec. 5 and Lille OSC (4-0) on Dec. 13. Park failed to make much of an impact in those two matches, but he scored the lone goal in a Dec. 16 game against Stade Rennais to help his club break out of its slump, then repeated the feat in two ties, against Olympique Lyonnais on Dec. 20 and Le Mans UC 72 on Dec. 23.

The 24-year-old has scored six goals this season for AS Monaco, which sits in 11th place with eight wins, three draws and seven losses.

After playing for FC Seoul in the K-League, Park signed with AS Monaco in September 2008. Park went on to receive the team’s player of the month honor in October. Although the forward failed to score a goal that month, he was recognized for his movement up front and his ability to create chances. Park would go on to score five goals in 31 league games in his rookie season.

AS Monaco will play its first league match of the new year against Montpellier on Jan. 13 at Stade Louis II.

As a member of the Korean national team, Park’s strong play as of late is welcome news to manager Huh Jung-moo. Park and Lee Keun-ho have played in the forward position on the team, but failed to capitalize on all their scoring chances. Now veterans like Lee Dong-gook, who won the K-League scoring title in 2009, are being considered, but the national team still lacks a forward with a deft scoring touch.

Since joining the national team in June 2005, Park has notched 13 goals in 39 international matches. Park and other overseas-based Korean players will not participate in January training camps, instead joining the team in March.