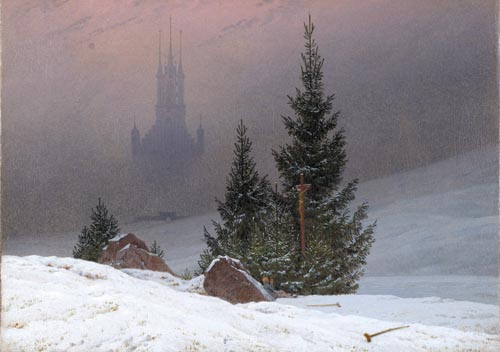 After writing “Good night” on the door of his lover’s house, a man steps outside into a cold, dark night. His lover has just had a change of heart, and he leaves quietly, setting off on his own. Walking on desolate winter roads, he shudders from the bitter chill that torments his body and soul. From time to time, he gets lost in sweet memories of warm days, but is always brought back to reality by the sharp wind and barren landscape that surrounds him. Seized by visions of death, his soul gradually works its way toward madness. When he arrives at the village outskirts, he finds an old hurdy-gurdy player and, lacking any destination of his own, decides to travel with him for a while.

Frankly speaking, song cycles are difficult and somewhat boring to me compared to the drama of operatic arias. However, I keep returning to Winterreise again and again. 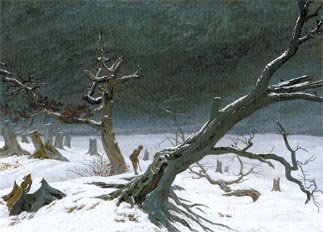 One of the reasons I keep going back is that I am fascinated by the album cover art.

Why is Friedrich so popular among those who design Winterreise album covers? Is it because he was a German artist in the Romantic era in which Schubert also lived? Is it because he frequently painted desolate and mystic winter landscapes that were distinct from the cheerful and boisterous winter paintings of his Dutch contemporaries? Is it because Friedrich’s paintings frequently featured a lonely wanderer? All of these reasons, I think, are true.

The paintings evoke a sense of alienation from secular society, which is full of life but also replete with noise and vulgarity. They contain a sense of sad freedom and the cold stability that such alienation can arouse, while also eliciting a fundamental sense of loneliness.

The Winterreise poems by the German poet Wilhelm Muller (1794-1827), on which Schubert’s song cycle is based, describes the narrator’s feelings of alienation after his lover changes her mind and his desire to come to rest in a graveyard, which he calls “a cold inn.” These ideas are very much in accordance with the sensations Friedrich’s paintings arouse.

Friedrich painted many winter landscapes, but the ones without tombs are perhaps the most desolate and gloomy of them all.

For example, in “Winter Landscape” (1811), which is housed at the Staatliches Museum in Schwerin, Germany, the sky is dark like despair and the field is white like a shroud. There are two trees with bare branches and tilted trunks, which seem to be on the verge of collapse. Scattered here and there are a number of trees whose trunks have been cut off, leaving only the stumps. Walking among them is a wanderer who leans heavily on a stick. We cannot see his face but it is well represented by all of the things in the painting.

There seems to be no resting place for the wanderer - even the coldness of the graveyard is absent from the scene. He will likely have to keep wandering indefinitely, pulling his tired legs along with him through biting winds that sweep the ground under the low, dark sky.

I think this painting, among Friedrich’s many winter landscape paintings, matches Schubert’s Winterreise the best. Winterreise is full of relentless despair and finishes not with the hero’s death but with his departure for an indefinite period of wandering.

Surprisingly, the Winter Landscape in Schwerin, Friedrich’s darkest painting, is not the only painting with this name. The artist also painted another “Winter Landscape” in the same year in a similar size. It now hangs in the National Gallery in London and is one of the artist’s brightest paintings.

Whereas the trees in the Schwerin painting are bare or have been reduced to stumps, the London painting has handsome fir trees that stand straight and tall, with green leaves set against white snow.

There are also differences in lighting in the two paintings. In the Schwerin painting, the sky is dark and overcast; in the London painting a delicate light spreads across the sky, which seems to be enveloped in a mist that hangs like veils.

In the background of the painting in London, there appears the silhouette of a Gothic church. The church, with its holy and mystic atmosphere, looks like the shadow of the tall evergreen tree in the foreground.

In front of the cluster of fir trees, a man prays before a crucifix. Is he the wanderer from the Schwerin painting, who has now found a restring place? He is leaning back against a boulder, instead of kneeling, so he must be too tired to kneel for his prayer, or it could be that his legs are injured. However, the soft light surrounds him like a blessing and even the white snow has a warm and cozy feel.