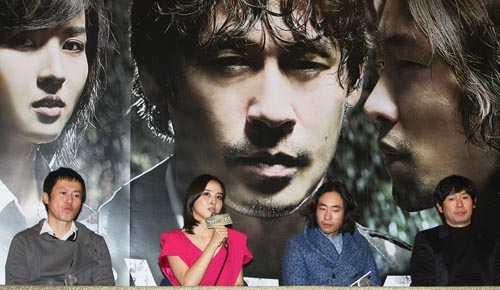 “No Mercy” director Kim Hyung-jun and actors Han Hye-jin, Ryoo Seung-bum and Sul Kyung-gu, from left to right, attend a press conference after a preview screening on Dec. 22. [YONHAP]


The new Korean thriller “No Mercy,” which opened in local theaters yesterday, happens to have the same title as the 1987 action movie starring Richard Gere. There are other similarities between the two - both contain a lot of action scenes and center around a crime - but the Korean film is more closely tied to other Korean thrillers such as “Seven Days” (2007) and “Secret” (2009).

No Mercy began drawing attention before its release for its high-profile cast and suspenseful plot. The film’s stars, Sul Kyung-gu and Ryoo Seung-bum, have both gained widespread respect for their acting skills and this is the first time they have appeared on screen together. The plot is reported to have a dramatic reversal that has been called the most shocking ending in Korean film since “Oldboy” (2003), the internationally acclaimed Korean film directed by Park Chan-wook.

The plot follows forensic pathologist Kang Min-ho (Sul) as he tries to track down Lee Seong-ho (Ryoo), an environmental activist who claims to have killed at least one woman in protest against a government river development project. As Kang investigates the case, his daughter is kidnapped and Lee is the primary suspect.

For Sul, the scene that has generated the most buzz is the one in which he points a gun at his head - a scenario he played to chilling effect in the 2000 film “Peppermint Candy” by Lee Chang-dong. 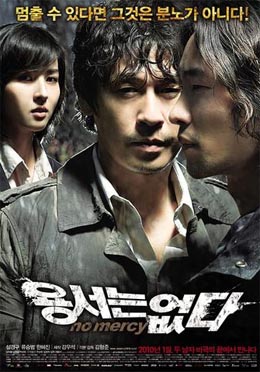 When asked how he felt about doing two such similar scenes, the actor seemed nonchalant.

“Peppermint Candy was the first film of the year 2000, as it was released on Jan. 1 of that year, and now here I am 10 years later with a new film that is the first film of 2010,” Sul said at a press event in Seoul late last month. “It’s filled me with emotion. But I don’t want to give special meaning to that particular scene.”

“I think of this movie more as a drama [than a thriller] that just takes the shape of a thriller,” Sul said. “It may be too heavy for some, but I believe that audiences will be able to empathize with the story because the movie makes you think about human beings in the end. It will be interesting to grasp the movie’s story line, no matter which of the characters you focus on.”

As the title suggests, the movie deals with mercy, forgiveness or the lack thereof.

“I thought about the meaning of ‘mercy’ and ‘forgiveness’ while participating in this movie,” said actress Han Hye-jin, who plays Min Suh-young, an intelligent female detective who helps Kang with his daunting task.

“As the movie implies, to forgive someone, you need to put yourself in their shoes. It is something you have to face in your daily life and it is always difficult, no matter what the issue is.”

Kim Hyung-jun, the first-time director who also wrote the script, agreed with Han, saying that the concept of empathy was something he was trying to express as he was developing the story line.

“It is impossible to forgive someone if you don’t put yourself in that person’s place,” Kim said. “And when I wrote the script, I wanted to put audiences in the position of the two main characters.”

No Mercy is currently playing in local theaters.