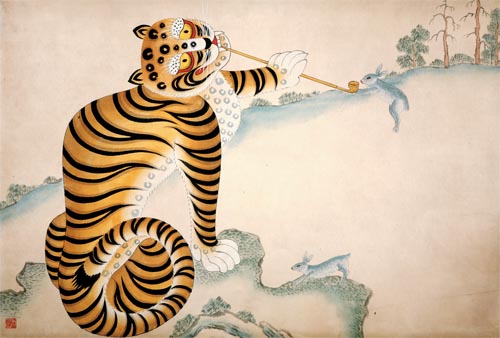 “Smoking Tiger” by Suh Gong-im was completed in 1997 but is based on old folk depictions. Provided by Lotte Gallery

In the late 19th century, the American missionary William E. Griffis wrote in his book “Corea, the Hermit Nation” that Korean aristocratic ladies carried jewelry and mementoes in a small pouch fastened to their waists. One of these charms was sometimes the claw of a tiger, to deter evil spirits. They believed the ferocious animal had a mysterious power and that even its claw could stop bad luck.

Tigers have long been part of Korean life. The fierce creatures used to live in the wild on the peninsula, but in the 20th century habitat loss and poaching - much of it by Japanese civilians and imperial forces - killed them off. The last wild Korean tiger was seen in the 1940s. 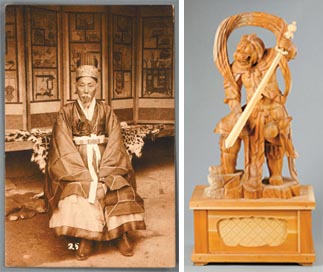 Left, a Joseon official sits in front of a tiger pelt in an early 20th-century postcard. Right, this statue is part of a zodiac cycle from 2002. Provided by the National Folk Museum of Korea

But before modern times, Koreans were frequently attacked by tigers, records show - lending the creature a fearsome yet powerful cultural aura. Though Korean tigers today can only be seen in the flesh at zoos, they are still alive in many legends, proverbs, tales, folk crafts and paintings. Curators are taking advantage of 2010, the year of the tiger, to show off some of these beautiful depictions.

The oldest documentary record in Korea that mentions the tiger is the history book “Samguk Yusa,” or “Memorabilia of the Three Kingdoms,” written by the monk Ilyeon during the Goryeo Dynasty (918-1392). In the most important myth recorded in the book, a tiger and a bear pray to become human, and the son of the heavenly king says if they live in a cave and eat nothing but garlic and mugwort for 100 days, they will succeed. Only the bear holds out long enough. According to Lee Yong-ju, former professor at the Academy of East Asian Studies at Sungkyunkwan University, the tiger in this story is “a symbol of life and wild nature that refuses to become civilized.”

It was said during the later Joseon Dynasty (1392-1910) that tigers too old to catch prey often came down into villages and attacked people. According to “Joseon Wangjo Sillok,” or the “The Annals of the Joseon Dynasty,” hundreds of people died due to tiger attacks in one year in the Gyeongsang provinces. There was even a military unit formed to catch tigers by Joseon.

Gu Mun-hoi, curator of the small exhibition “Tiger: From Myth to Everyday Life” at the National Folk Museum of Korea in Seoul, says, “Tigers were feared so much that people made special tombs for those who were slain by tigers.” The enclosures were meant to prevent the victims’ spirits from being enslaved by tigers after death. 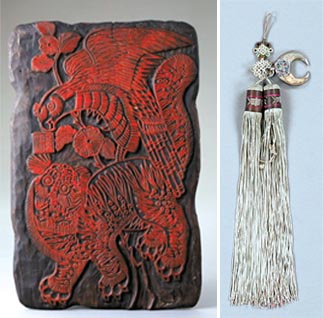 Left, this stamp was used for talismans in the late Joseon period. Right, this ornament with a talisman in the shape of a tiger claw was used to ward off evil spirits. Provided by the National Folk Museum of Korea

The tiger is the third of the 12 animals that comprise the Chinese zodiac. Its domain is the first month of the lunar calendar, or the hours between 3 and 5 a.m.

Specifically, 2010 is the year of the white tiger, a creature that has its own mythology attached as one of the guardian gods of the four compass directions, the others being the azure dragon, the vermilion bird and the black tortoise. The white tiger guards the west.

Tigers also appear in the murals on the walls of a tumulus from the ancient Goguryeo period (37 B.C.-668).

“There are always stone statues of white tigers standing in the royal tombs of the Joseon,” Gu said. “The tiger was held as sacred.”

The ferocity of the animal led to a belief that the image of a tiger could fend off evil spirits. The tiger was featured with the falcon in many talismans designed to deter the “three years of misfortune” said to come every nine years.

Beyond the tradition of wealthy females carrying tiger’s talons or accessories shaped like them to fight off evil spirits, during the Joseon period tiger pelts were laid on the roof of bride’s palanquins, children wore tiger-shaped hoods, and tiger patterns were sewn onto pillows.

Tigers are also featured in many folk paintings. In Joseon, during the first 10 days of the first lunar month, one such painting or a piece of paper with the Chinese letter for tiger would be posted on the main gates of both palaces and even the homes of ordinary people.

One genre of folk painting, called jakhodo, features a tiger and one or two magpies. People also hung these on the wall at the beginning of the year. The two animals were depicted together because it was believed tigers fend off evil while magpies invite good luck, although in reality, Gu says, “Tigers would never be seen together with other animals, including magpies, because most would run away,” Gu said.

In these folk paintings, tigers are friendly rather than scary. Some are even smoking tobacco pipes. “Although tigers are vicious creatures, they are portrayed humorously,” said Sung Yun-jean, curator of an exhibit of tiger folk paintings by Suh Gong-im at the Lotte Art Gallery at the Avenuel department store in Seoul.

A contemporary artist, Suh has been replicating and modernizing folk paintings for the last 30 years of her career. She enjoys painting tigers in particular. “Tigers mean a lot to Koreans,” Suh says. “I personally like their tenacity and wanted to imitate their nature.”

In one old Korean fable, a woman’s grandson refuses to stop crying. She warns him, saying a tiger will come if he continues to cry, to no avail. But when she says she will give him a dried persimmon, he stops crying. Meanwhile, a tiger lurking outside hears the whole thing. The tiger thinks, “These ‘dried persimmons’ must be something even scarier than me!” And it runs away.

Tigers have remained popular in modern Korean iconography. The mascots for the 1988 Seoul Olympics were tigers, and they’re often seen in corporate trademarks.

Zoos still offer a chance to see the majestic beasts. The Everland theme park in Yongin, Gyeonggi, has 13 white tigers, the largest number in the country. The theme park opened a white tiger safari last year. Tigers are usually orange with black stripes, but white tigers have a recessive genetic trait for their differing coloration. Most white tigers are Bengal tigers from India, not the Siberian tigers that once inhabited Korea. The Seoul Zoo in Gwacheon, Gyeonggi, formerly known as Seoul Grand Park, has 23 Siberian tigers. The Seoul Zoo also has a white tiger born there in 2000. Seoul Children’s Grand Park in Gwangjin District, Seoul, has five Siberian tigers.

*The Tiger: From Myth to Everyday Life at the National Folk Museum of Korea continues through March 1. Admission is free. For more information, call (02) 3704-3114 or visit www.nfm.go.kr.