Nigeria in the sights at first friendly

Nigeria in the sights at first friendly 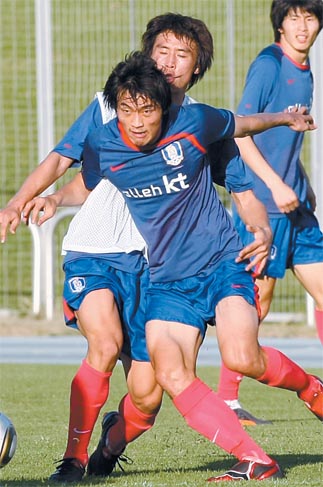 Shin Hyung-min struggles for the ball at a team practice at Olympia Park Stadium in Rustenburg, South Africa yesterday. [YONHAP]

The national football team is set to enter their first test of the new year when they face Zambia at Rand Stadium Saturday at 11:30 p.m. Korea time in Johannesburg, South Africa. The friendly match will be a good opportunity to compete against an African club, but considering Zambia played Nigeria yesterday to a scoreless draw, the national team can also gauge how it stacks up against that country, which is in Korea’s group with Argentina and Greece for the World Cup.

Within the team, the battle for playing time has begun. The national team held its first practice games, 35 minutes in length, early yesterday morning in Rustenburg, South Africa.

The national team was divided into two sides, with one team consisting of projected starters and the other side backup players. Pohang Steelers players distinguished themselves, with the AFC Champions League’s Most Valuable Player, Noh Byung-joon, partnering with Lee Dong-gook (Jeonbuk) up front and Kim Jae-sung, also from Pohang, at the right wing usually occupied by Lee Chung-yong. Yeom Ki-hun of Ulsan played the left wing. Shin Hyung-min (Pohang) took one of the center midfield positions, while Kim Jung-woo (Gwangju) started in the other.

The defensive line consisted of Choi Chul-soon (Jeonbuk), Cho Yong-hyung (Jeju), Lee Jung-soo (Kashima) and Oh Beom-seok (Ulsan). The projected starter team is expected to get a majority of the playing time in the friendly against Zambia tomorrow. Kim Young-kwang of Ulsan was in the net in the game, but Lee Woon-jae from Suwon is expected to get the call against Zambia.

The three Steelers stars showed off their solid teamwork. In one play, Noh received a pass from Shin and found Kim with a heel pass which he crossed to one of his teammates.

Kim Shin-wook (Ulsan) was substituted in for Lee Dong-gook about 10 minutes into the game. Coming off his rookie season in the K-League, Kim is competing with the veteran Lee for the striker position. Lee, with 22 goals in 75 international matches for Korea, is looking to go to the World Cup for the first time since the 1998 event in France, while Kim is a newcomer. The two are also roommates at the camp.

“In my opinion, Lee is the best striker in Korea. I am learning a lot from him,” Kim said. “I think it’s an honor to be rooming with him on this trip. He has been giving me detailed tips on how to deal with K-League and European defenders, and it has been a huge help.”

Meanwhile, national team coaches have been busy putting together scouting reports on Nigeria. Assistant coach Park Tae-ha and video analyst Kim Sae-yoon were not able to tape the match between Nigeria and Zambia but were able to enter Absa Stadium in Durban, South Africa posing as journalists.

According to Park, Nigeria started most of its star players and used a 4-4-2 formation in the friendly match. Yakubu Aiyegbeni and Obafemi Martins started up front for the Super Eagles, while Chelsea’s John Obi Mikel started at center midfield. While the players flashed plenty of individual talent, the group as a whole lacked teamwork. During Nigeria’s possession, the transition from defensive line to take the ball into enemy territory was far from smooth. As a result, Nigeria failed to penetrate Zambia’s defense. Park said this was likely due to the lack of practice the Europe-based Nigerian players have had together.

“It’s difficult to assess a team based on one game, but I got the impression that Nigeria has an excellent offense,” said Park.

The national football team will continue to analyze their World Cup opponent by sending coaches to the African Nations Cup in Angola from Jan. 10 to 31. Nigeria has been grouped with Egypt, Mozambique and Benin in Group C of that tourney.