The whole nation a grassy tomb

The whole nation a grassy tomb 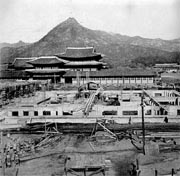 The Japanese governor-general’s office, once located at the foot of Mount Namsan, was relocated to a new building in front of Gyeongbok Palace on Jan. 7, 1926, 10 years after construction began upon the end of the Joseon Production Exhibition in the autumn of 1915.

The Japanese occupiers held the then-cutting-edge industrial exhibition under the pretext of publicizing the benefits of colonial rule at home and abroad, to mark the fifth anniversary of the Japanese annexation of Korea. They had already decided to construct a new building for the governor-general in front of Gyeongbok Palace, after due consideration of the symbolic and cultural meaning attached to the heart of the Joseon Dynasty (1392-1910).

The construction of the new governor-general’s office began soon after. Even the remaining palace buildings - Gangnyeongjeon and Gyotaejeon - were also demolished for their materials under the pretext of restoring Changdeok Palace to its original state after a fire in 1917.

On the site where the buildings once stood, the occupiers planted grass with a sign that read, “Grass.”

Grass is pronounced sacho in Korean, and the sound “sa” has long symbolized death and misfortune here. There are countless elevators that label the fourth floor with the letter F, while other buildings exclude a fourth floor altogether, because the number is pronounced “sa.” Grass was only used for tombs back then, and was never planted in the front yards of homes as one might see in the West.

About 1.6 million people attended the exhibition, 10 percent of the entire population at that time. They almost certainly got the message intended by the grass planted on the Gyeongbok Palace grounds. The governor-general’s office planted grass after demolishing buildings at almost every palace in Seoul, in a bid to induce Koreans to associate old palace buildings with the royal tombs of the Joseon Dynasty.

But those emotions disappeared as time went by, and people’s association between grass and palaces seems to be stronger now than the association with death. In fact, Koreans’ love for grass is today almost limitless.

Since half a century ago, grass in the front yard has become commonplace, and many golf courses covered with grass have been built in the mountains.

Yet if a Korean from a century ago were to see this, he might complain that the whole nation had become a tomb.

*The writer is a research professor at the Center for Hospital History and Culture at the Seoul National University Hospital.