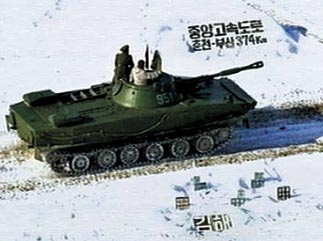 The Korean Central Television in Pyongyang ran 59 still photos of drills by the 105th Armored Division. The country’s leader, Kim Jong-il, visited the base for his first field inspection of 2010 and watched the exercise take place. The exact date of the exercise was not reported. He also made the unit his first destination for inspection last year.

In an indication that the North had directly targeted the South in its exercise, four of the photos showed signs bearing names of South Korean cities and highways. In one, a tank is seen passing a sign reading, “The Chungang Expressway, Chuncheon-Busan 374 km,” in reference to a highway that connects Gangwon province on the east coast and the Gyeongsang regions in the southeast.

The station reported that Kim was pleased with the preparedness of the division. It is the first unit that invaded Seoul at the onset of the Korean War in 1950.

While the North has been known to do military drills aimed at the South, it marked the first time that photos of such exercises were reported in its state media.

The timing of the release of the photos also raised eyebrows in Seoul. In its annual New Year’s Day editorial published in official newspapers, North Korea said it would try to improve inter-Korean relations and “open the way for national unification,” and that its consistent stand is “to establish lasting peace on the Korean Peninsula and make it nuclear-free through dialogue and negotiations.”

The South Korean government was taken aback by the pictures and was still scrambling to determine the North’s intentions.

One government official said, “They can set up virtual targets or do whatever they want in military drills, but the releasing of photos is a very sensitive matter.”

Yoo Ho-yeol, professor of North Korean studies at Korea University in Seoul, said the North may have been trying to boost morale in the military - especially with the Dear Leader himself in attendance - and to send a message to the South.

“With their economy in turmoil [following the abrupt currency revaluation late last year], the North wanted to justify to the public that military has to be the focal point,” Yoo said. “Also, they had to know we’d see these pictures. They’re trying to tell us that we have to keep their military strength in mind when engaging in dialogues in the future.”