TBC was one victim of dictatorship’s censorship

TBC was one victim of dictatorship’s censorship 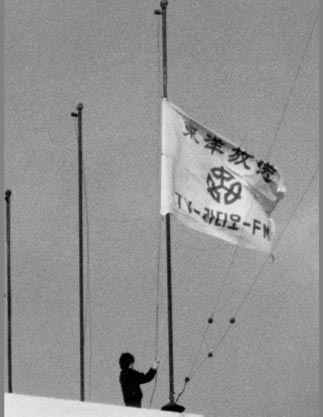 A TBC staff lowers the broadcaster’s corporage flag after the military regime forcibly shut down the operation on Nov. 30 of 1980. [JoongAng Ilbo]

Shortly after seizing power through a coup in 1979, the military regime of Chun Doo Hwan campaigned that media companies voluntarily initiated restructuring to better accommodate the public interest.

A fact-finding mission by the Truth and Reconciliation Commission, however, concluded yesterday that the state abused its power and illegally and shut down or consolidated media companies. In November 1980, Korea had 28 newspapers, 29 broadcasters and seven news wire services that were forcibly shut down or consolidated into 14 newspapers, three broadcasters and a single news wire.

In addition, 172 periodical publications were closed. The military regime claimed that they were obscene and detrimental to society, but the commission said it found no grounds to back the argument. “The media companies that were restructured not only suffered financial losses but also the irrecoverable damage of social stigma,” said a commission official.

One of the media companies affected by the military regime’s measure was the Tongyang Broadcasting Company, a broadcaster that had been owned by the JoongAng Ilbo. At midnight of Nov. 30 of 1980, TBC’s radio aired its last program. The broadcaster’s TV also aired a farewell program starting at 8:45 p.m. that night.

According to the records documenting the incident, released by the truth commission, TBC was worth 22.5 billion won ($19.8 million) at the time, but the Chun regime had proposed to pay 4.1 billion won for KBS’s takeover of TBC. The regime had said the amount was based on the appraisal value of TBC’s broadcasting equipment. However, it was not clear how much was actually paid.

TBC was Korea’s first privately held TV broadcaster, established in 1964. According to company records, “Assi,” one of its popular dramas that ran from March 1970 to January 1971, recorded a 70 percent viewing rate.

The Chun regime, however, shut down TBC under the campaign that no newspaper should be allowed to operate a broadcaster. TBC was merged into KBS.

“Because TBC had such a great influence and Koreans loved the broadcaster, the Chun regime used it as a tool to maximize the impact of its revolution,” said Kim Kwang-ok, a media studies professor at the University of Suwon.

“The true intention behind the action was to nurture only broadcasters and newspapers favorable to the regime,” the commission said.

Although the commission said the state must apologize for the past wrongs and compensate the victims, the path to restore honor and receive restitution won’t not be easy because the statute of limitations has expired in many cases.

“The state must restore honor to victimized journalists and media and pay financial compensation,” said Moon Jae-wan, a law professor at Hankuk University of Foreign Studies. “The losses incurred at the time should be investigated and then the amounts to provide in compensation should be determined.”