Staying safe on those snowy slopes

Staying safe on those snowy slopes

With the days shorter, gloomier and, of course, colder, sitting inside alone might make for warmer feet, but it can also lead to cabin fever. To beat the winter blues, more and more Koreans head out to ski and snowboard - yet these are dangerous sports, and a lack of experience could lead to serious injury, and crashing into others or falling off the course can be deadly.

You might think injuries from skiing would be concentrated on the legs, but in fact the opposite is true. The greatest danger is to the upper half of the body, especially the hands and arms, while advances in safety equipment have reduced the number of ankle injuries - though these are still common with snowboarding. Broken bones are also a risk of winter sports.

The danger is most acute for beginners. According to research, 25 percent of beginners sustain major injuries while snowboarding, with over 50 percent or more encountering problems during their first season.

But experts who attempt dangerous, more advanced jumps may experience injuries too, especially to the head, face, spine and abdomen.

Crash into another person head-on, and there’s a 5 to 10 percent chance of injury. Safety on ski lifts is also important, since 8 percent of injuries come from getting on and off lifts.

Twice as many accidents occur during the afternoon (68 percent) than do during the morning (32 percent). More specifically, the fewest take place between 10 and 11 a.m., followed by a sharp increase in the afternoon from 3 to 5 p.m., when the body feels the most fatigue and concentration suffers. Snow also melts faster in the afternoon due to higher temperatures, making it difficult for skiers to turn. Injuries take place, on average, after skiing for three hours.

Weekends are also more dangerous than weekdays, since more experienced skiers are usually on the slopes during the week while beginners head out during regular days off. 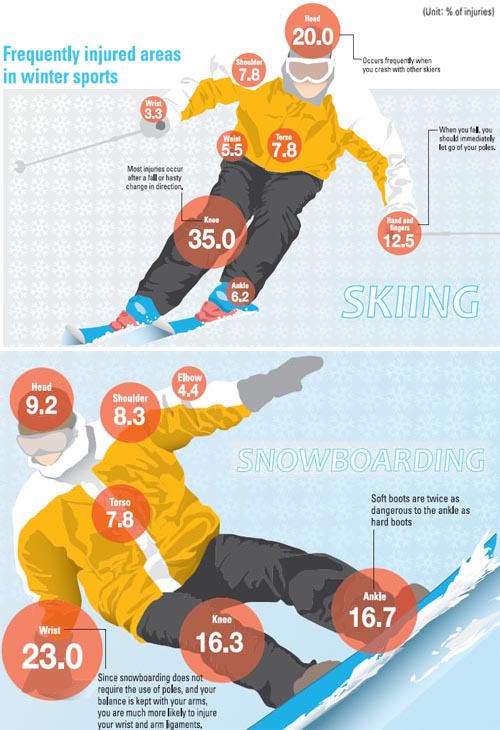 Skiing and snowboarding require the use of the hips, knees and abdomen, so strengthening these muscles will reduce risk. Since the air is cold, one must always warm up and stretch for at least 15 to 30 minutes before heading to the slopes.

Even learning to fall is important, since it can reduce the severity of any injury. A good fall involves bending your knees and sitting as soon as you fall, shifting your body weight to your buttocks.

Good gear also vastly improves your chances of making it home safe. In the early 1960s, ski boots were very short, and ankle sprains were very common among skiers. Longer boots have taken pressure off the ankles, but increased risk to the knees. According to U.S. statistics, at least one person on every slope suffers damage to ligaments in the knee as a result of the binding that joins the boot to the ski. A binding that’s too tight puts immense pressure on the joint. It’s important to keep the bindings looser to allow them to be taken off more easily after a fall.

The most commonly injured part on the arm is the thumb, due to improper use of poles. In a fall, the chance of injury is 71 percent for skiers who keep holding their poles, but just 19 percent for those who let go. The impact of the poles’ collision with the ground can severely damage the wrist.

Snowboarders, meanwhile, should use the same wrist guards in-line skaters do, and helmets are vital, since head injuries, especially to the back of the head, are common. 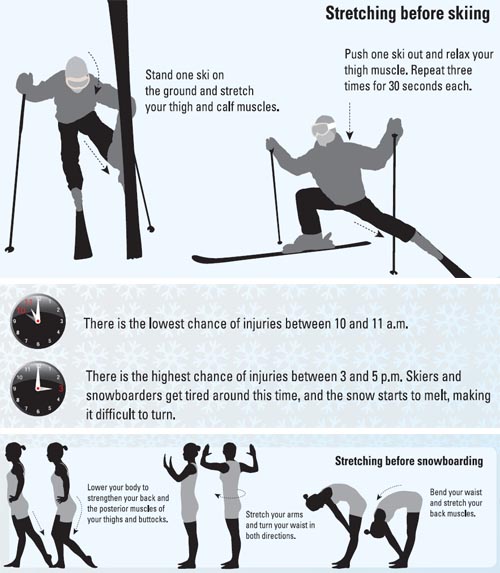 After an accident, it’s important not to touch the injured area to avoid causing further damage, which could cause a lifelong disability. Seek help from safety personnel or stabilize the wound and ask for further assistance from medical professionals.

For injuries less serious than broken bones, remember “RICE”: “R” for rest, “I” for ice, “C” for compression and “E” for elevation. Ice or cold packs should be applied every day for an hour to an hour and a half, and the area should be compressed with a firm pad and elevated, above the torso if possible, for at least 72 hours.

If a joint seems to bend incorrectly or you feel a popping or snapping sensation, you are probably experiencing a ligament injury. Care should continue even four to five days later, after the pain subsides. 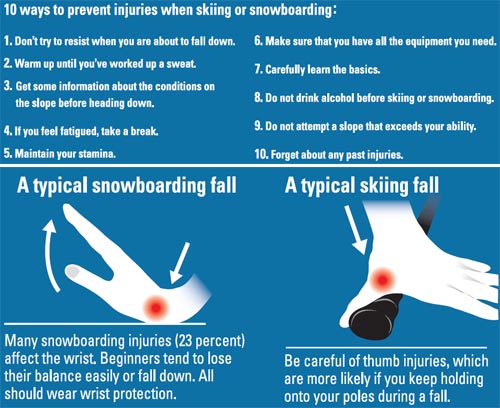