Melting the snow, and our city

Melting the snow, and our city 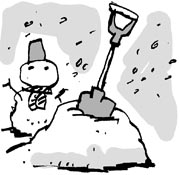 Snow is a nuisance in the city. There are piles of snow on every street, but no snowmen, no snowball fights and no winter atmosphere. There are just piles of snow that have frozen before melting completely to change into ash-colored waste. “Snow is alive [...]/For souls and bodies that have forgotten death/ Snow stays alive throughout the night,” writes Kim Soo-young in “Snow.” But perhaps to a cleaner in a concrete forest, “In front of accumulating snow/ My heart is dark” (Go Eun, “Snowy Road”).

The real star of the heaviest snowfall in a century is calcium chloride, a chemical that absorbs 14 times its weight in moisture. When sprayed on snow, it absorbs the water, and the heat from this reaction melts the surrounding snow. Snow that has melted into water because of calcium chloride has to be cooled to minus 54.9 degrees Celsius (minus 66.8 Fahrenheit) before it freezes again, which is why the roads aren’t covered in ice despite this cold snap.

In Korea, calcium chloride was first produced in 1968 by Dong Yang Chemical Co. You may remember the company, which was Korea’s exclusive producer of soda ash, from “Daehan News” propaganda newsreels, where it was used as a symbol of the chemical industry. Soda ash is a very valuable product with many uses, from artificial seasonings to glass, soap and gunpowder. Calcium chloride is a byproduct created in the process of producing soda ash. It was first used to melt ice here on Dec. 10, 1969, when it was sprayed on roads near Samgakji and at the start of the Cheonggye Stream overpass after four centimeters (1.6 inches) of snow fell on Seoul.

Calcium chloride first entered the home in 1984, when the “Water Drinking Hippopotamus” was launched, providing homemakers relief from humidity indoors during monsoon season. Recently, a new expression has appeared, “money-drinking hippopotamus,” in reference to the low birthrate’s effect on tax burdens.

Though it may melt snow, calcium chloride is also 1.3 times more corrosive than salt. It was even blamed for the collapse of Seongsu Bridge in 1995. Around eight tons of calcium chloride had been sprayed there each year to melt snow, and apparently it rapidly corroded the bridge’s joints. Around 100 ginkgo trees along Tongil-ro also turned brown because of calcium chloride, which sucked up their nutrients and moisture and increased the salinity of the soil.

If you think about it, a shovel and broom are the best tools for cleaning up snow. You just have to shovel it off to one side and wait for the sun to melt it. Making snowmen is another method. “The entire body of a snowman is his heart/ It is a man made by putting a small heart on top of a big heart/ This is why it melts so fast/ This is why it leaves no trace,” writes Kwon Hyuk-woong in “Snowman.” Yet why do we have to rush in melting the snow? There is just one month left until the first day of spring.

*The writer is an editorial writer of the Joong-Ang Ilbo.