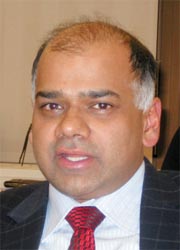 WASHINGTON, D.C. - After more than three weeks of field study with his team, Subir Lall, the division chief for Korea at the IMF’s Asia-Pacific department, has concluded that the prospects of the Korean economy in 2010 are bright.

In an interview with the JoongAng Ilbo late last year, Lall also said that the Korean currency was still undervalued and that there were no bubbles in real estate prices in Korea outside of a few select neighborhoods.

It was a quick and dramatic turnaround in Lall’s opinion from just six months prior, and he acknowledged the Korean economy’s dynamism had a lot to do with the shift. Half a year ago, Lall was pessimistic, but after seeing Seoul he changed his mind.

Every time Lall comes to Seoul - whether a year ago or just six months - he said he can feel the energy in both the public and private sectors.

He said he was impressed by the Korean economic recovery, but most of all he took note of the sharp increase in consumer confidence.

In the first three months of 2010, most of the world would see similar growth to the first quarter of 2009, Lall said, but Korea will be different. Korea’s economy hit bottom in 2008, and is now back in full growth mode. Lall predicted Korea’s economy will grow more than 4.5 percent in 2010.

Korea was able to overcome the economic crisis earlier than other parts of the world, the official said, because Korean conglomerates faced worldwide economic turmoil with better balance sheets. Thanks to their larger stores of cash, they were able to spend into the crisis, making investments that their overseas counterparts could not.

The weaker Korean won also contributed to exports, while the Korean government acted swiftly to expand fiscal spending and implement a low-interest policy.

Still, Korea’s economy is very dependent of the global economy, Lall said. When the global economic crisis grew serious just over a year ago, the capital withdrawal from Korea was worrisome, Lall said, but thanks to global efforts to stimulate the economy, Korea’s markets are now recovering.

Exports to the U.S. will never be the same, Lall conceded, since that huge market is finally cutting back on imports. However, he added that the strength of Korean companies is that they have access to a variety of markets across many regions.

The only problem is the global uncertainties that will persist until mid-2010. Lall advised Korea to prepare to build growth engines to reduce dependence on exports.

Korea is a still a maturing economy, Lall believes, and it needs to enhance the competitiveness of its service sector and focus on future-oriented industries such as green growth. Lall added that Korea should also prepare to serve its quickly aging society by creating jobs for senior citizens as well as women.

Meanwhile, the local currency is still too weak, Lall said. He anticipated it would strengthen to the levels seen before the economic crisis, depending on factors including the flow of foreign exchange, global investment and the status of emerging markets.

After graduating from the University of Delhi in 1989, Lall received his master’s degree and doctorate in economics at Brown University.