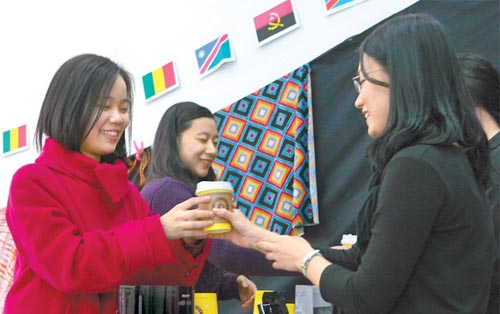 Lee Seul-ki, far right, a member of the club “Stand Up Africa,” sells coffee from beans her group bought in Kenya at Sookmyung Women’s University in late November. Provided by the university

The 23-year-old is a member of the 30-member school club “Stand Up Africa,” which was organized to help African children.

“One of the ways to motivate poor African children to develop their dreams is football,” Lee says. “The club is planning to deliver necessary items, including a football, school supplies and clothes, worth some 200,000 won [$176] to Kenya through an international relief organization that is scheduled to visit the country late this month.”

With her fellow members, Lee visited the city of Kayole in Kenya under a university program in January 2009. Kayole, which is located near Kenya’s capital of Nairobi, is one of the major slum areas in the country.

The junior said she and other students were moved by what they saw of the lives of the children in the city.

“I can still remember young kids playing with worn-out footballs, and their smiles while learning words,” Lee said.

She said she saw that sports and education would be the only way for those children to escape from poverty.

So, when the students came back to Korea, they created the club.

The group held one-day coffee shop events in October and November to collect funds. Students used beans that they had bought in Kenya to make takeout coffee and served traditional African crackers, which they learned how to make with help from African expatriates living in Korea.

Of that money, the club members sent 1 million won to an orphanage in October last year, with another 1.2 million won to follow this month. The remaining money will be used to buy gifts for the kids.

Lee said the orphanage, the only shelter where poor children in Kayole can stay, was established by a philanthropist in 2006.

Though it’s located in one shoddy brick building and tents, the orphanage at least offers children a place to study and eat, according to Lee.

“With help from club members, we were able to provide necessities, including 62 kilograms [136 pounds] of rice, five kilograms of salt and six boxes of toilet paper, to the orphanage,” said the Center for International Voluntary Service, the relief group through which the club made its contribution.

But this care package won’t be the end for Stand Up Africa, which is planning a new round of fund-raising coffee shops at universities across Seoul.

“The school is planning to create more visit programs to offer opportunities to students who are interested in foreign aid so that they can visit other poor countries in Asia and Africa,” said Lee Ju-hui, head of the university’s International Affairs Office.