Huh frets over forwards after loss

Huh frets over forwards after loss 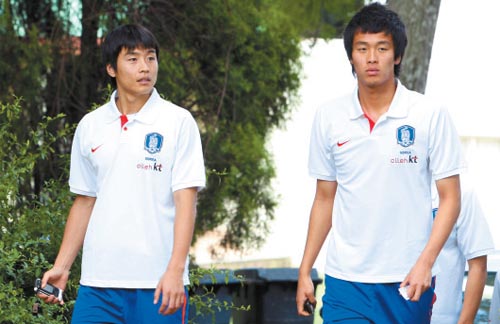 Lee Dong-gook, left, and Kim Shin-wook walk back to their rooms at the Hunters Rest Hotel in Rustenburg, South Africa, yesterday. [YONHAP]


With the first friendly match of the new year out of the way, the most pressing need for the national football team remains the same. They need forwards who can score goals.

The team got a day off after a 4-2 loss to Zambia in Johannesburg, South Africa, early Sunday. Manger Huh Jung-moo has a practice scheduled today before the team takes on the Platinum Stars of South Africa’s Premier Soccer League at Rustenburg Royal Bafokeng Stadium starting at midnight tonight, Korean time.

The loss against Zambia showed lapses in defensive coverage and a failure to create offensive opportunities. Though the overseas based players are missing from the lineup, lack of production up front is a concern for Huh.

“We are continuing to evaluate candidates to fill the striker position, but if the current group of players fail to meet expectations in the friendly matches leading up to the World Cup, we will have to do without them,” Huh told the Korean media yesterday. “Lee Dong-gook, Kim Shin-wook and Ha Tae-gyun are the players who are capable of filling the position.”

Since taking the manager position with the national team in December 2007, Huh has been hunting for a forward who can produce goals. The most decorated forward on the national team at the moment is Lee Dong-gook. Since being selected for the national team in 1998, Lee has scored 22 goals in 75 international matches for Korea. He had one of his finest seasons of his career by scoring 20 goals for the K-League champs Jeonbuk Motors in 2009. As such, Lee has received a lot of interest from media and fans alike. However, since returning to the national team late last year, Lee has failed to score in five friendly matches.

“I am trying hard to make the national team for the World Cup. I have a lot on my mind these days. I hope people can leave me alone so that I can concentrate on football,” Lee said in an interview with JoongAng Ilbo.

“[Jeonbuk manager] Choi Kang-hee’s faith in my play was a huge help in turning things around last season with Jeonbuk. I haven’t received that type of faith from Huh, but I know it’s up to me to earn his trust.”

Korea will play the final tune-up match in South Africa on Thursday against Bay United of the National First Division, a second-tier league, at Nelson Mandela Bay Stadium in Port Elizabeth at 6 p.m. Korea will then travel to Malaga, Spain, to play Finland on Jan. 18 at 11:30 p.m. and Latvia on Jan. 21 at 11:30 p.m.

Huh said yesterday he had requested two friendly matches in May against South American and European teams as part of the national team’s preparation prior to the 2010 World Cup.