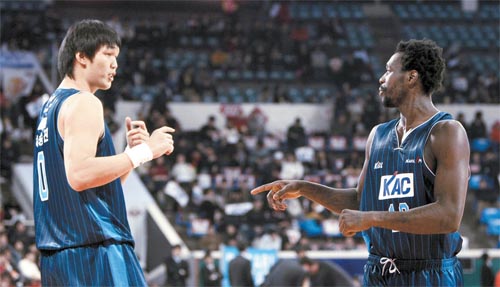 Before the two teams faced off Sunday, Yoo said, “The addition of Leather will not make much of a difference. Micah [Brand] was the more feared player.” But after the game, Yoo made an about face, saying, “It seems Leather will become the key component of the KCC game plan.”

It’s not surprising Yoo changed his mind. Winning 87-71 on Sunday, KCC handed Mobis their most lopsided loss of the season. KCC never gave up the lead, dominating their opponents from beginning to end. And the biggest factor in the game was Leather.

Leather owned the court last season for the Samsung Thunders, who lost to KCC in the finals. Despite leading the league with 27.5 points and 11.3 rebounds last season, the addition of ethnic Korean Lee Seung-joon resulted in decreased production for Leather. Since the 29-year-old center was playing in his final year with the Thunders, team officials decided it was better to ship the disgruntled and underperforming Leather to another team. Late last week, Samsung reached a deal with KCC to swap Leather for Brand.

What makes the University of South Florida graduate effective is his versatility. Though a center, Leather is different from prototypical centers like Ha Seung-jin. Due to his speed, Leather covers more floor on both the offensive and defensive sides of the ball.

“Leather will make us a stronger team in the post,” head coach Hur Jae said after the trade. Despite having Ha, KCC was in need of an upgrade in their front court. Prior to the trade, KCC showed a weakness for smaller and quicker teams like Mobis and gave up a lot of rebounds. On Sunday, Leather filled the void left by Ha. In the past, Mobis head coach Yoo had used the strategy of drawing Ha to the perimeter to free up the paint. That strategy did not work as Leather quickly rotated to cover the low post when Ha was drawn away from the basket. Leather played a total of 18 minutes but posted 14 points, five assists and seven rebounds.

Leather also gelled well with Ha on the offense as he rotated in and out of the perimeter to complement him.

“With the addition of Leather, our team speed has increased a lot. Even when Ha is slow to rotate, the weakness can now be covered,” Hur said.

“I will open up space for Ha so that he can focus on attacking the low post,” Leather said.

In addition to bolstering the front court, Leather has helped improve the execution of offensive strategies, and perimeter shots have also improved. On Sunday, Mobis defenders could not stray from Ha and Leather, and this in turn freed up the perimeter, allowing KCC guards to get free looks from beyond the arc.

Leather took advantage of the mismatch by kicking out to his guards whenever he got double-teamed in the low post. As a result, Leather recorded five assists, and KCC, as a team, connected on 11 3-pointers. In crafting a perfect harmony between front court and perimeter plays, a total of six KCC players recorded double-digit scores in the game.

Leather is also good at screen plays and two-on-two plays with a guard.

“Leather has made my life a lot easier,” said rookie point guard Chun Tae-poong, who recorded five 3-pointers in the game.

In KCC’s next match, Leather will face his former team the Samsung Thunders tomorrow in Jamsil, southern Seoul at 7 p.m.