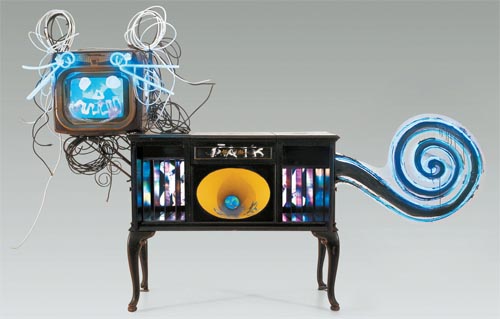 The Korean contemporary art would not be what it is today without Gallery Hyundai. The gallery has launched the careers of some of the most influential artists working in Korea today and helped make connections between Korean artists and artists working in other countries.

The Gallery Hyundai branch in Sagan-dong will display realist works. The Gangnam District branch will focus on contemporary and abstract works. All the works on display are on loan from the collectors.

Forty years ago, when Gallery Hyundai opened in Insa-dong, central Seoul, a reporter writing about the gallery’s opening marvelled about the type of business the gallery would enter: selling paintings. Up to that point, no one had charged anyone a fee to own a piece of art.

“Nowadays people may laugh about it but at the time it was worth a story,” Yoo Hong-june, former professor of Myongji University and former administrator of the Cultural Heritage Administration, wrote in the exhibition catalogue. “It was equivalent to the story about the first pizza restaurant in Korea opening in Itaewon in the 1980s.”

Gallery Hyundai was one of the first commercial galleries in the country. It not only provided the pubic with an opportunity to see art but also became a bridge between artists and collectors at a time when the country’s economy had begun to take off.

The gallery’s inaugural exhibit in 1970 was a solo show by Park Soo-keun, who was well known at the time and is still one of the best-selling artists in Korea today. Later, the gallery held exhibitions with emerging artists such as Lee Joong-seop in 1972 and Chun Kyung-ja in 1973. Lee’s paintings are full of emotions and history and Chun is known for her surreal portraits of women. Both have since gained widespread recognition in Korea for their work.

“Prior to the 1970s, artists were looked down upon,” Jung Joong-hun, vice president of Seoul Institute of the Arts, wrote in the exhibition catalog. “Gallery Hyundai was like an oasis to artists, because it not only exhibited their paintings but also sold the paintings on their behalf.”

Among the artists the gallery promoted are big names like Paik Nam-june and Kim Whanki, two artists who revolutionized their respective forms of video and abstract art.

Most of the works in the exhibition are paintings, with the exception of the pieces by Paik. One of his pieces, “Tiger is Alive,” is rarely shown to the public. Like his other creations this piece is made with television sets, but this one is shaped like a tiger.

Tiger is Alive is not the only rarely seen work in the exhibit. Park Soo-keun’s “Water Well” is well known among Koreans because it is featured in school textbooks but it, too, is not often put on display.