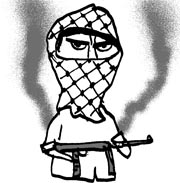 Finding a potential terrorist at an airport is like finding a particular Mr. Kim in Seoul. It is nearly impossible to tell the terror suspect apart from all the different travelers there.

This is why it is important to catch would-be terrorists early on, before they put their destructive plans into action.

Unusual patterns of financial transactions can clue in investigators about a terror suspect. When they traced the financial records of 19 terrorists who took part in the 9/11 terror attacks, they found that they made withdrawals in small amounts after depositing a big amount and remitted money regularly with foreign banks. Other common points were that they did not use ATMs on Friday afternoons and did not have any insurance policies. The logic is that Muslim terrorists would not go to the bank on Friday afternoons because that is when they hold their prayer services, and that terrorists don’t need an insurance policy since they cannot get the money if they die in a suicide bomb attack. However, there are always exceptions to these patterns, and potential terrorists might do something unusual just to avoid looking suspicious.

Likewise, the profile of your “average” terrorist might not always be accurate. Although the poor and uneducated are considered the most likely to become terrorists, the would-be terrorist on Christmas Day in the United States was the son of a distinguished Nigerian family.

However, he is not the only one. A study found that among Palestinian terrorists who committed suicide bombings, only 16 percent were poor, while over 60 percent were better off and had graduated from high school.

What is the reason? Alan B. Krueger, an economics professor at Princeton University, suggested that the group of people with a high likelihood of becoming terrorists is similar to the group that has a high probability of voting in elections. That is, their sense of responsibility to their communities leads them to terrorism. Krueger believes their rationale is that they cannot leave their neighbors to fall into the hell of poverty, while they enjoy a wealthy life.

Therefore, there is strong evidence that providing development assistance to Islamic countries that feel relative deprivation to the West is the best terrorism prevention measure. Likewise, this is why some say that increasing a military presence in the Middle East will only make terrorism worse.

Greg Mortenson, an American humanitarian movement activist, established 130 schools in Pakistan and Afghanistan even though he is criticized as a “traitor” by his compatriots. He hopes that the children of these countries grow up to be schoolteachers, business managers and leaders of a well-to-do country in the future by freeing themselves from the shackles of extremist Muslim doctrine. The war on terrorism should be carried out without interruption, but the problem is finding the right way to prevent terrorism.