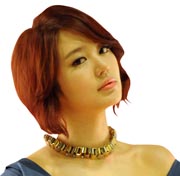 Singer-turned-actress Yoon Eun-hye has contributed her talents to a new single by the boy band 2PM.

Yoon started her career as a member of the girl group Baby V.O.X. and launched her acting career with the role of Shin Chae-Kyeong in the hit MBC drama “Princess Hours” in 2006. The song, “Tik Tok,” tells the story of a celebrity who is involved in a secret love affair.

An employee of JYP Entertainment, 2PM’s management company, said, “With the addition of Yoon, the affectionate feelings of the lovers are expressed well.”

After it was released on the Internet on Jan. 12, the song quickly went to No. 1 on several online charts and could be a follow-up to the hit single “Heartbeat” released last fall.