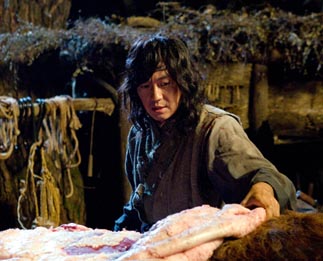 Actor Park Yong-woo plays Hwang Jeong, the lead character in the new historical drama “Jejungwon.” The character is the first surgeon in the Joseon era and later becomes an independence fighter. Provided by SBS

There are a number of reasons why medical dramas are popular. They depict the tensions that arise in emergency situations, the competition that elite med school students face, and the conflicts between the noble goal of saving lives and the hectic reality of working at a hospital.

The Korean medical dramas, “The Great White Tower” and “New Heart” combined all of these elements to win high ratings and critical acclaim. But just as in medicine, there is no set formula for success on television, and it’s hard to predict which combination of elements will win viewers over.

“Jejungwon,” a new drama that revolves around life at the first modern medical institution in Korea, is hoping it has the right combination of fact and fantasy. The show, which currently airs every Monday and Tuesday at 10 p.m. on SBS, is named after the hospital established by King Gojong in 1885 at the suggestion of American medical missionary Horace N. Allen. (The hospital was originally known as Gwanghyewon, or Widespread Relief House; the name later changed to Jejungwon and then Severance Hospital.)

Actor Park Yong-woo, 38, plays Hwang Jeong, the lead character whose story is loosely based on a real person. Hwang was born into a poor family, grew up to be a butcher and later became the first surgeon in the Joseon era and an independence fighter.

“The reason why I didn’t hesitate to take the role was that Hwang Jeong is a very realistic character, which appealed to me,” Park said in a recent interview.

“Hwang Jeong entered Western medicine due to his deep resentment about the death of his mother, who died without treatment because of his family’s low social standing,” Park said. “He doesn’t stop trying to achieve his goals and starts thinking not only about saving people’s lives but also his country. Although he seems somewhat unsophisticated, for ordinary people he is a humane and caring doctor, and I tried to portray those qualities so that viewers would empathize with him.”

Jejungwon, which consists of 36 episodes, follows Hwang Jeong as he enters medicine and competes with his peers at the hospital; later, after he has become a surgeon, we see him leaving for Manchuria to fight for Korean independence.

Scriptwriter Lee Gi-won, who wrote the script for the 2007 hit medical drama The Great White Tower, which he based on a Japanese novel, talked about how he became interested in Jejungwon.

“When I was working on The Great White Tower, I started doing research on the Korean medical system and found that one of the graduates of the medical school affiliated with Jejungwon was the son of a butcher,” he said. “As the movie ‘Forrest Gump’ portrays America through the eyes of an individual who had an eventful life, the drama Jejungwon will give you a glimpse of what life in the late Joseon Dynasty [1392-1910] was like through the story of Hwang Jeong, who comes of age during his time at Jejungwon.”

Park is returning to television for the first time in six years. He last appeared in the 2004 drama “Terms of Endearment” and then went on to movies like “Once Upon A Time” (2008) and “Handphone” (2009).

“I chose this role because Hwang Jeong is a dramatic character any actor would want to play,” Park said. “I also liked the social message in the drama. And even though the drama is set in the Joseon Dynasty, the message still resonates. I also feel that Hwang Jeong’s story resembles my journey toward becoming an actor.”