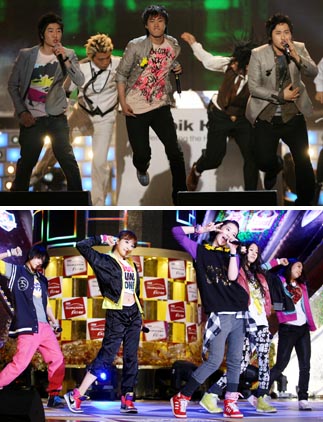 Epik High, a Korean hip-hop group, and the girl band f(x) will show off their talents at a music trade fair in Cannes later this month. [JoongAng Ilbo]

The Korea Creative Content Agency said Tuesday that the hip-hop trio Epik High and the five-member girl band f(x) will perform at the “K-Pop Night” event at the Marche International du Disque et de l’Edition Musicale, or Midem, which will be held on Jan. 24-27 in Cannes. The annual event, which has been held in Cannes since 1967, is the world’s largest music industry trade fair. It aims to connect musicians and businesspeople from around the world and showcase new artists and trends.

“Midem is an important venue for f(x), which plans to advance into China this year,” said an official of S.M. Entertainment, the management agency of the rising girl band, which debuted in September last year.

“Midem, which is attended by music professionals and industry officials from around the world, is a big opportunity for Epik High,” an official of the group’s management agency Map the Soul said. Epik High toured the U.S. last year and plans to move into the European market this year.

“Though it is not our solo concert, we are aiming to let people from around the world know what Korean pop music is like,” Tablo, the leader of Epik High, was quoted by the agency as saying.

The Korea Creative Content Agency is also sponsoring the Korea booth to promote all genres of Korean music, the agency said. The booth will show promotional video clips featuring Korean musicians working in pop, jazz, classical and traditional Korean music, and material from 17 Korean entertainment companies, including S.M. and Map the Soul, will be displayed, the agency added.