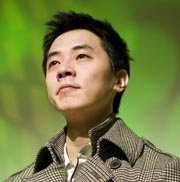 Lee is part of the six-member boy band Shinhwa. He also had a spot on the MBC reality show “We Got Married” in 2008 and became the head of ND Entertainment in 2007.

Over 200 fans came to see Lee before he entered the army base in South Chungcheong Province. He promised fans he would come back in good health.