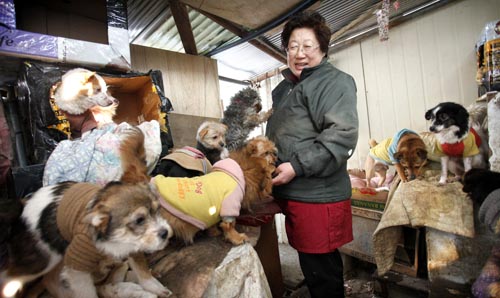 Bong-gu is two years old and weighs 8 kilograms (17.8 pounds). In May 2009, he was found wandering on the street, confused, and was rescued by Kim Sae-rom. Bong-gu is a dog, a schnauzer with bluish-gray and black fur, and Kim, a member of the group Korean Animal Rights Advocates, rescued him because she was afraid he might get hit by a car.

Kim says that since his rescue Bong-gu has been cheerful and loyal. “Lost animals tend to have a longing for love,” Kim said. “Even animals feel grateful for being rescued.” 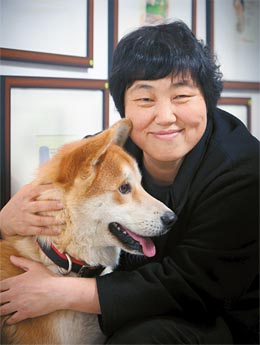 Lim Soon-rye is a film director and president of KARA. By Park Jong-keun

Even so, Kim put him up for adoption through KARA’s Web site (www.animalrightskorea.org) because she already has four other dogs including three dogs she found in the streets. “There is a limit in the number of dogs I can take in,” she said.

Like Kim, many of KARA’s 10,000 members are taking care of lost animals. Some adopted the animals or are keeping them until adoptive owners can be found.

Founded in 2002, the nonprofit organization has rescued and puts abandoned pets, mostly dogs, up for adoption and supports and distributes food to private shelters for animals.

“There are people who say that life is hard enough for them and they can’t afford to pay attention to animals, but the reason for the hardship is because of a lack of consideration for the weak,” said Lim Soon-rye, a well-known film director who became the president of KARA last year. “If we develop a mind-set and culture of caring for animals, the weakest, we humans will benefit the most from it.”

Lim said she has been living with abandoned dogs in Yangpyeong County, Gyeonggi, since 2000.

“We have been fighting for human rights and equality, and now it is time to take interest in a life - the lives of animals,” Lim said. “Companion animals and livestock have been developed for the needs of humans and only we humans can solve their problems.”

And they have their work cut out for them with Korea’s large number of abandoned pets. 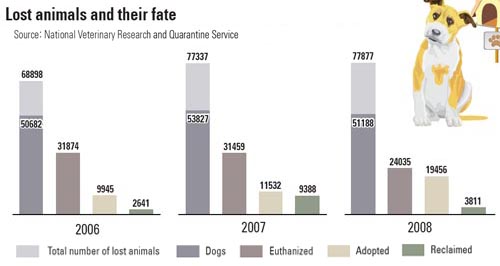 Why are so many animals lost or abandoned? According to KARA, there is a variety of reasons. Perhaps the owners did not want to care for aging or sick animals and pay their medical expenses. Some animals wander off due to negligence, and some owners even abuse their animals, which eventually run away. Many people simply throw out their pets when they move, get married or become pregnant.

Because dogs tend to return to their masters, the group says, some owners intentionally leave them in places far enough away that they will not be able to return. This may have been the case last summer, when over 100 dogs were found on Yokji Island, a popular summer vacation destination, near Tongyeong, South Gyeongsang.

“It is rare for so many lost dogs to be found at the same time,” said Yun Jung-im, a manager at the Korea Animal Welfare Association. “There is a sudden increase in the number of lost dogs on islands during summer vacations, as people leave their dogs behind.”

KARA blames human selfishness for the abandonment of so many companion animals.

“People only see pretty pets in the media or in pet shops,” Kim said. “They keep their animals when they are pretty, but when they get old and ugly, they throw them out. They consider their pets disposable. They do not respect life.

“People don’t expect that their pets may wet their beds, poop on their carpet and chew on their shoes,” Kim added. “They don’t know it takes a long time to do toilet training, and they just don’t want to wait.”

Zang Byung-kwon, one of 150 volunteers for KARA, said, “People treat these dogs like their accessories rather than regarding them as companion animals.”

When homeless animals are found on the street, rescuers go out and capture them. The law requires them to be kept for seven days while regional governments advertise, looking for their owners. If the animals are not reclaimed after that first week, they can stay in shelters for another 10 days. After that, they can be adopted, donated or euthanized. Around 30 percent of the lost animals in shelters are put to death every year.

According to the Ministry of Food, Agriculture, Forestry and Fisheries, Korea has 270 state-sponsored animal shelters, 257 run under government commissions and 13 run directly by regional governments.

However, there are also shelters run by animal lovers who pay overhead costs out of pocket. It is uncertain how many such private shelters exist in the country but the biggest difference between these private shelters and government-commissioned shelters is that they do not kill lost animals even if no one adopts them.

“There is a reason for the existence of private shelters,” Jung said. “The only way to save [these animals] is for more people to adopt them.”

One of the KARA shelters, in Sudong-myeon, Namyangju County, Gyeonggi, is run by an elderly woman named Jeon Yeong-yi. Jeon works at a supermarket nearby to earn money to pay for dog food and veterinary expenses. Jeon said she started bringing lost dogs home 10 years ago, when a neighbor of hers sold his dog to a restaurant before moving to Seoul. She saw the dog being abused and felt so bad that she paid the restaurant a little money and took the pet back, before it could be butchered. She later started adopting more lost or abused dogs in her neighborhood. Now, she keeps 80 animals, mostly dogs, at the shelter.

“Most of the dogs are old, so they are abandoned,” Jeon said. “They are thrown out in the streets.”

Nearby is Sudong Valley, popular among summer vacationers for its stream. The problem is that a lot of vacationers leave their dogs here when they return home. “I saw a car suddenly stop, and out came a dog,” Jeon said.

Even in KARA’s care, the dogs have faced obstacles. Recently, KARA paid to build fences around the shelter after neighbors complained about the barking. One nearby farmer even gave the dogs pork tainted with rat poison because he did not like the dogs pooping on his farm.

Jeon said the number of dogs keeps rising, but she’s running out of space - an experience common among most volunteers and shelters keeping lost animals.

With the number of animals in need of care on the rise, KARA and other animal rights groups are trying to change the animal protection laws to stop pets from being abandoned. Korea’s first animal protection laws were instituted in 1991 and amended in 2007. Under the laws, those who are guilty of abandoning animals are subject to a maximum 500,000 won ($445) fine. However, Jung at KARA said the laws are not very effective in reducing the number of lost animals.

Animal rights groups including KARA submitted a legislative proposal in December to the Ministry of Food, Agriculture, Forest and Fisheries to lobby for stricter laws. The proposal includes clauses that require community service for those who throw away their pets and mandate the registration of all companion animals.

“Paying fines is not enough. There needs to be tougher punishment for those who throw out their pets in order to stop the animals from being abandoned,” Jung said.