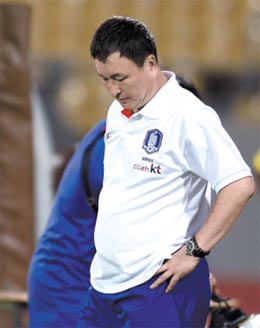 RUSTENBURG, South Africa - The national football team is nearing the end of its training camp in here. After playing the local Platinum Stars to a scoreless draw early yesterday, Korea will play its final friendly match in South Africa against Bay United at Nelson Mandela Stadium in Port Elizabeth tonight at 6 p.m., Korean time.

The venue of today’s match is the same one where Korea will take on its first World Cup opponent, Greece, on June 12, making it a good opportunity for the players to get a feel for the field conditions and climate of the city. The Bay United belong to the National First Division, a second-tier league in South Africa, and were demoted from the top league after playing at the bottom of the league standings last season.

Although the national team will travel to Malaga, Spain, and play two more friendly matches against Finland and Latvia, the pressure is building for players to perform. Coach Huh Jung-moo has now given all of his players time on the field, using all 22 position players in yesterday’s friendly against the Platinum Stars.

“We will continue to rotate all our players into the game until the game against Bay United. Compared to the match against Zambia, the team is playing better, but our players have yet to get comfortable with the high-altitude climate,” said Huh.

Huh also flirted with a formation featuring three defensive backs in the first half without much success. “We went with a three-back formation to see how our opponents would react, and it had several positives. I will have to consider this strategy in the future facing an African team,” said Huh.

The biggest reason for the lackluster performance so far has been a lack of teamwork. Huh has encouraged strong competition among his players as he looks to trim his roster to the 23 that will represent Korea at the World Cup in June. However, some are suggesting the intense competition is having an adverse effect on the team.

“We have an organizational problem at the moment. All 11 players on the ground are supposed to work as one,” said midfielder Kim Do-heon.

“Our team is not working as a team. Extreme competition is resulting in poor results,” explained forward No Byung-jun. “We need players who need to make sacrifices for the team, but due to the current situation, in which every player is fighting for a spot on the team, players are thinking for themselves.”

Huh has matched players fighting for the same spots on the roster as roommates. The tension has been noticeable at practices, where instead of making the perfectly timed pass or communicating with one another in games, players are eager to prove their worth on the field.

For his part, Huh said he would continue to test different strategies and evaluate his players. As for the results of the friendly matches so far, Huh was not pleased but preached patience.

“We were not too pleased with the results of today’s [Platinum Stars] game. However, it’s not good to get too concerned over a friendly match,” he said.