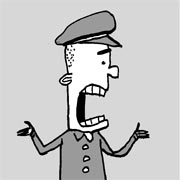 The scene described in Chapter 12 of the Old Testament’s Book of Judges is brutal. There are passages that describe people being killed because they spoke a different dialect. It all happened in the midst of confusion created by the war between Gilead and Ephraim. The Gileadite soldiers kept a watch at the mouth of the Jordan river and inspected the Ephraimites passing by.

To allow passage, the soldiers demanded that the Ephraimites pronounce the word “shibboleth.” The word derives from ancient Hebrew and means an ear of corn.

The soldiers knew that there was no “sh” sound in the Ephraim language, therefore the Ephraimites would fail the test. The Book of Judges recounts that 42,000 Ephraimites were killed by the soldiers because of this difference in pronunciation.

Dialects - that is, the differences in pronunciation of words within a language based on geographical regions - play a role in Korea as well. A student who moves from Gyeongsang to Seoul might be ridiculed because he pronounces “uim-ak” as “eom-ak” and “ssal” as “sal,” or because he could not distinguish the difference between the sound “ui” and “eo,” and between “s” and “ss.”

We are fortunate that the difference in dialects within South Korea only sometimes causes childish ridicule, and not something much more serious.

The situation is different, however, for North Koreans who come to the South. They often find that their Northern dialect becomes a stigma and makes their life painful here. Clearly, there are differences in the pronunciations between people from the North and their compatriots in the South. As North Koreans pronounce without palatalization, “ma-ji,” or the elder, is pronounced as “ma-di.” And they pronounce “yeok-sa,” or history, as “lyeok-sa,” because they do not follow the same language rules that we do.

The dialect differences are fetters that keep them from feeling wholly welcomed in the South. The youths who defected from the North are often ostracized by their classmates. They shut their mouths out of fear that they will speak in the Northern dialect. Employment of adult defectors is often canceled at an interview due to their North Korean accent. When they make a phone call to answer a job posting, they are often hung up on once their potential employers hear their Northern accent.

In addition to “an ear of corn,” the word shibboleth can mean “difficult to pronounce.” I wonder whether South Korean society is a place as difficult as the word “shibboleth” for the North Korean defectors whose numbers will reach 20,000 soon. Even though they risked their lives to come down to the South, this country is not a place where they can even talk freely in their own language.

The Korean Institute of the Korean Language will open an online class, “Standard pronunciation class for saeteomin [North Korean settlers].”

It will be good news if the class can improve the unfortunate situation that the defectors find themselves in. But I wonder how easy it will be to change someone’s native dialect that they have learned since birth.

I think South Koreans who are embracing the defectors as neighbors must change their mind-set about the “correct” pronunciation of Korean first, in order for us to live together.