Korea has hopes for its few judoka

Korea has hopes for its few judoka 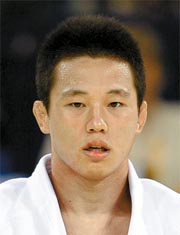 The world’s top judoka are set to compete in the Suwon World Masters tournament at the Suwon Indoor Gymnasium in Gyeonggi over the weekend.

Ranked a notch below the Olympics and World Championships, the International Judo Federation awards 600 points for Olympic gold medalists, 500 points for World Champs and 400 points for Grand Slam winners. Judoka from 42 nations ranked in the IJF world ranking’s top 16 across each weight class are set to compete in the IJF Grand Slam event hosted in this suburban city. Korea held the World Judo Championships in Seoul in 1985, but this is will be the country’s first Grand Slam.

The clear favorite to win a gold at the event is Wang, who currently holds a consecutive winning streak of 52 matches. Since winning the Kano Cup, now referred to as Grand Slam Tokyo, Wang went undefeated in 2009 by capping off the season with another win at the Grand Slam Tokyo last month. Wang’s 52-match win streak is an all-time Korean record with the previous record-holder being Lee Won-hee, a gold medalist at the 2004 Athens Olympics.

Yasuhiro Yamashita, a retired Japanese judoka, currently holds the all-time world record for most consecutive wins at 203, achieved from1977 to 1985.

Wang will have plenty of competition as all of the top-ranked judoka in the weight class are set to compete over the weekend. Dirk Van Tichelt of Belgium, ranked second in the world; Mansur Isaev of Russia, ranked third; and Bang Gui-man of Korea, ranked fourth are all vying to end Wang’s winning streak.

Kim Jae-bum, who ended last season with a loss in the finals to Euan Burton of Britain at the Grand Slam Tokyo event will be looking for a win at home. With Ivan Nifontov of Russia currently ranked ahead of Kim, the Beijing Olympics sliver medalist can grab the under 81 kg division’s top rank with a gold in Suwon.