Exploring modern emotion at the airport

Exploring modern emotion at the airport 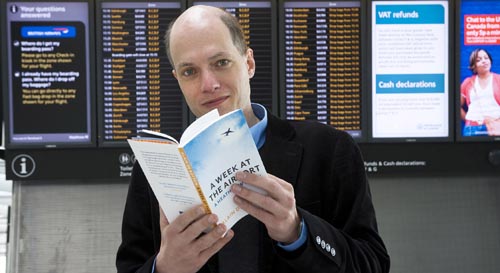 Alain de Botton spent a week at a desk at Terminal 5, Heathrow Airport. “A Week at the Airport” was the result. Provided by Cheongmirae

Airports might be some of the world’s most unexplored places. Passengers are busy finding their gates or hunting for bargains at duty-free shops, or they’re too giddy or sad to be starting off on their travels look around.

So it was strange, to put it mildly, when best-selling author Alain de Botton received an offer from London’s Heathrow Airport to become its writer-in-residence. A small desk was set up for the author of “On Love,” “Kiss and Tell” and “How Proust Can Change Your Life,” and he was allowed full access to the newly opened Terminal 5.

The result was “A Week at the Airport: A Heathrow Diary,” which saw its Korean version published by Cheongmirae, hitting bookstore shelves earlier this month.

For Botton, who confesses in his introduction that he often fantasizes about being delayed at airports because he loves them so much, it was a place where he could meditate upon various topics such as identity, relationship and loss.

Here are excerpts from an e-mail interview with the author.

Q. When you got the offer from Heathrow Airport, how did you feel? Did you accept without hesitation, or did you feel it might be challenging?

A. I was deeply surprised to receive a call from Heathrow Airport. I thought that perhaps they had found my lost luggage from a few years ago. Then they made me this very unusual offer: to be able to come and live at Heathrow for a time and write about how it works, meet everybody and so on. Normally, airports are completely closed to outsiders. We may be fascinated by them, but we are never allowed to ask, or to go through doors into the areas where the staff work. They are more private even than prisons. So I relished the chance to go where I wanted, to talk to whomever. The real problem with airports is that we tend to go there when we need to catch a plane - and because it’s so difficult to find the way to the gate, we tend not to look around at our surroundings.

And yet airports definitely reward a second look - they are the imaginative centers of the modern world. Here you see globalization, environmental destruction, runaway consumerism, family breakdown, the modern sublime etc. in action.

Do you know why Heathrow Airport chose you over so many other authors?

As for why I was chosen over other authors, the chief executive of Heathrow had read my book “The Art of Travel” and his wife had admired “Essays in Love.” So it was really just a piece of luck, I feel very blessed.

Tell us about a day at the airport.

I was given a desk in the departure area of Terminal 5. I was in full view of everyone, with my computer. Lots of people came to say hello, and I interviewed them at the desk. I felt like a priest or a psychotherapist. I also went around the whole airport, talking to staff and passengers: interviewing everyone from pilots, to air traffic controllers to those who make the meals. The idea was to provide a portrait of a representative week in this complex location.

What was the most exciting part of your weeklong visit to Terminal 5?

I had a great time being taken out on a tour of the runways in the middle of the night, when they are no longer in use. There is a man whose job it is to drive up and down the runways, looking for bits of metal or debris. He is a great lover of the novels of Herman Melville. We had great conversations out there in the darkness, on the landing strip that in a few hours, would be receiving jets from Korea, America and South Africa. It felt so odd to sit on the runway in the middle of the night. It was rather like entering the bathroom of a fallen dictator, or touching an inert 40,000 kilowatt electricity line or putting one’s hands inside the jaws of a slumbering shark or crocodile; I felt in touch with something so dangerous and yet momentarily safe.

In your introduction, you confess that you love airports so much. Is there any specific reason for that?

I have always felt a bit between cultures; never quite belonging anywhere. I am Swiss, but live in England. I am a writer in a world of businesspeople. So I am slightly in a weird position. I am not a typical member of my society. I find that airports are wonderful for me because there, everyone is an outsider, a stranger, a traveler: I like the atmosphere of disconnection. They are lonely places, but also places where we can find a strange sense of community. We are no longer alone in being alone.

You’ve been touching upon diverse issues in your books: relationships, literature, travel, work and architecture. It seems you have lots of curiosity and interests in many areas. What interests you most these days?

I am fascinated by religion at the moment. I am writing a book about what someone who doesn’t believe in anything supernatural might learn from certain world religions. Just today, I have been writing a passage about Korean Buddhism, which I am studying with particular enthusiasm knowing that I have such devoted and kind readers in Korea.

Do you have your own ways to overcome writer’s block?

I try not to panic. If one forces writing, it never comes. Sometimes, writer’s block is a chance for the unconscious mind to think about things. So I try to just to go for a walk, and hope that it will pass.


Every writer wants to deliver a certain message through his or her book. What do you want your readers to take away from ‘A Week at the Airport?’

I would like them to become more aware of the strangeness and wonderfulness of the world of the airport. Airports are places where high technology meets consumer culture - where we feel in the presence of the giant collective mind of the modern world. So often, we are in environments which haven’t changed much since the 19th century; suddenly at the airport, we see the promises of modernity: the promise of speed, transformation, infernal bureaucracy and nightmarish loss of individuality. It is a mixture of horror and beauty, which as an artist one can celebrate and lament.