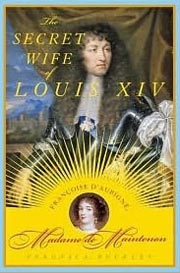 Buckley - who gained fame with “Christina, Queen of Sweden” -serves up a superior biography of a remarkable woman who, most improbably, became the Sun King’s second wife. Francoise d’Aubigne (1635?1719) was born in a grim prison, the daughter of a disinherited nobleman and traitor and a mother incapable of loving her. These facts together with a financially uncertain childhood, including a three-year sojourn in the Caribbean, contributed to the intelligent Francoise’s resilience but also to a deep emotional insecurity. A marriage of convenience to a renowned but crippled scholar brought her new social connections, which she, a lovely, popular young woman, exploited when she was widowed, becoming the governess of the secret illegitimate children of Louis XIV and Athenais de Montespan. After the queen died in 1683, Francoise married Louis, although the marriage remained secret. Buckley trains her intent gaze on 17th-century France, from the civil and religious wars that plagued the Bourbons to lively Parisian salons, offering a graceful, vivid portrait of a woman of intelligence and dignity.