A million ways to warm up

A million ways to warm up 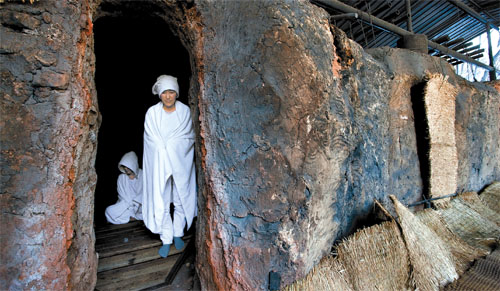 Charcoal saunas like this one in Hoengseong County, Gangwon, draw many fans for their unique supposed health benefits. By Cho Yong-chul

On a cold winter day, the first word that pops into many Koreans’ minds is jjimjilbang, or sauna. But which one to choose? There are traditional charcoal saunas and modern jjimjilbang. The authentic charcoal saunas are mainly found in Gangwon Province, because oak is used in charcoal furnaces and oak trees are abundant in the area. Nowadays, however, charcoal saunas can also be found throughout the Seoul metropolitan area, piggybacking on the “well-being” health trend.

The saunas and spas around Seoul are also evolving. Five or six years ago there were big saunas, but today massive ones with water parks and fitness clubs are becoming a huge hit. They often have outdoor swimming pools and patios with a view, bringing even more popularity.

In Hoengsong County, Gangwon, there are 32 charcoal-producing furnaces run by the Gangwon charcoal association, making it the biggest charcoal-producing region in Korea. The oldest furnaces here have been operating for about 50 years. Attached to these old factories are saunas that take advantage of the heat produced from the burning oak, attracting about 100 to 200 tourists every day.

People who have been to these traditional saunas know they are a little uncomfortable. The changing rooms aren’t in close proximity, and there aren’t any shower facilities. There are simply straw mats laid out on the floor in front of the furnace. Still, people are eager to go through the experience, and most find it refreshing.

The kilns are made of red clay, and the heat emanating from the clay and the burning of the charcoal is said to have a cleansing effect. Naturally, the next thing to do is to take a shower, but the saunas’ operators say this isn’t necessary, since the charcoal smell neutralizes the stench of sweat.

Many people believe in the therapeutic power of saunas, but health experts say it is important to use them in moderation, not staying inside a sauna for more than 20 minutes at a time or for more than five minutes in rooms with extreme heat, which can lead to fainting or vomiting. Experts also recommend that sauna users drink water before entering and keep themselves hydrated once finished.

One kiln burns about eight tons of oak at a time. After the fire goes out, the kiln is opened and the charcoal is removed. The kiln is then allowed to cool off for about a day, and this is the time people can use the saunas.

To reach the saunas of the Gangwon Charcoal Association, take Yeongdong Highway and exit at Saemal Interchange. Drive about 10 kilometers (6.2 miles) and you will see the kilns. Admission is 5,000 won ($5), and robes and towels are 2,000 won each. A restaurant with barbecue options is available for about 11,000 won. 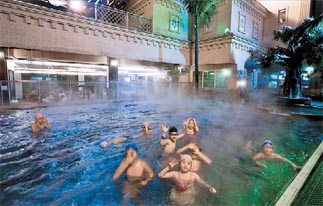 Children enjoy the heated pool at Dragon Hill Spa despite the chilly weather.

Walk into Dragon Hill Spa and you’ll see children in swimsuits playing in an outdoor pool. People are waiting to get in and peering through the windows. A typical summer scene - in the middle of winter!

The spa opened three years ago and instantly became a hot spot. It’s one of the biggest spas in Seoul at 13,200 square meters (142,083 square feet) and offers a variety of saunas, including a heated outdoor swimming pool. Even during the winter, the 24-hour pool runs at 37 degrees Celsius (98.6 Fahrenheit).

The sauna facilities are mainly located on the first floor and include conventional oak, crystal salt and pine tree saunas. The first uses oak wood charcoal to heat the room and is perfect for stress relief and relaxation. It’s spread across four rooms that range from low to high temperatures. The crystal salt room’s walls are covered in salt, and the spa boasts that a 30-minute nap in here will feel like five to six hours of sleep.

There is also a restaurant serving bulgogi marinated beef for 12,000 won per person. After the meal, wind down at the Royal Orchid Spa, where many foreign visitors enjoy facial treatments, hair care, massages and nail work.

The facility, a minute’s walk from central Seoul’s Yongsan Station, is near the I’Park Department Store, which includes an E-mart discount outlet for shopping and a CGV multiplex movie theater. Admission is 10,000 to 12,000 won. Call (02) 792-0001 or visit www.dragonhill
spa.co.kr.


The Spa in Garden Five

This sauna, opened last year, is located in a shopping mall in Mungjeong-dong, Songpa District in southeastern Seoul. It is a small, even quaint space, but the interior design is very modern and the 10th floor location offers a spectacular view of the surrounding city that reaches all the way to Namhan Fortress and the military Seoul Airport in Gyeonggi Province.

The heavy snowfall this month has made this view even more incredible, blanketing the city below in a thick layer of white. The atrium in the middle of the building makes the space appear roomier.

There are a total of seven oak wood charcoal and salt saunas, each with a theme, along with a skin care clinic and an ice room. Families and friends can even rent out VIP rooms to have all to themselves. To reserve a room for two to four hours, call ahead and pay 20,000 won.

There are also books, laptops and board games for recreational use and even a mini movie theater with about 100 seats. 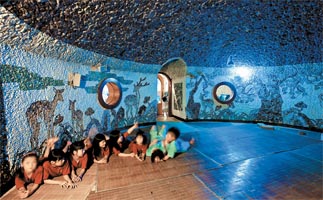 After it opened in 2003, Seoul Leisure Town immediately became known for its bargain prices. Since it’s near Korea University and Kookmin University, many young students and couples frequent this spa.

Two video rooms, a health club, a computer room, an outdoor sun-tanning area, a gathering room and a karaoke bar round out the facility.

Located between the Gangnam and Yangjae subway stations near “Bang Bang intersection,” Samil Gold Sauna and Fitness reopened its doors in November. The area is surrounded by companies and businesses, so during the afternoons and evenings, many business professionals flock here to unwind.

It may not be spacious, but it makes up for that with keen design. The fitness center is known for using far-infrared radiation to heat up the rooms.

A favorite snack to eat at these saunas are eggs, cooked from the inside out with the same radiation used to heat the rooms. Just like the eggs, visitors feel the inside of the body getting warmer more quickly.