The sadness of having hooves

The sadness of having hooves 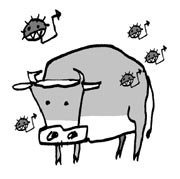 There is a set of dietary laws in Judaism called kashrut. Foods fit for Jews to eat are called kosher, and those unfit are called treif. Kosher foods, based on Genesis chapter 1, verse 29, include “every seed-bearing plant on the face of the whole earth and every tree that has fruit with seed in it.”

Fish have to have fins and scales, and animals that live on land have to chew the cud and have a split hoof, according to the book of Leviticus, chapter 11, verses 2 to 23. Therefore, cows, sheep, goats and deer are “fit” for consumption. Horses and camels chew the cud but do not have split hooves, and pigs have a split hoof but do not chew cud, so these are “unfit.”

Hooves are feet with wide and hard toenails. Most animals with hooves are herbivores that have evolved them to run away from predators. They also mostly have horns. There is a Korean saying that animals with horns do not have sharp teeth. Deer, known for being “sad with long necks,” have horns and hooves.

This fact brings them another sadness: foot-and-mouth disease. They lack even elementary immunity, and thus the disease is spreading in Pocheon, Gyeonggi. The disease causes blisters in the mouth and on the hooves, and the lethality rate is at most 55 percent. Thus the hearts of livestock farmers nationwide are freezing - but not because of the cold wave.

Foot-and-mouth disease is divided into the Eurasian serotypes A, O, C and Asia-1, and the South African serotypes SAT-1, 2 and 3. The problem is that these types mutate easily, making eradication difficult.

The foot-and-mouth disease that is appearing in Korea this time is type A. It has appeared in China every year since 2005, and the virus serotype A was found in two spots of the downstream Yangtze River last year. In 66 percent of cases the root cause was infected dairy products or meat, and in 22 percent it was migratory birds. In 2000, when the disease was rampant nationwide, yellow sand was called the main carrier.

They say people cannot catch it. Cooked or sterilized dairy products are also safe, apparently, because the virus is killed in just seven seconds at 76 degrees Celsius heat. Yet a case of possible human foot-and-mouth disease was reported in Britain in 1996. The Times reported that Bobby Brewis, a farm machinery salesman, fell sick with the disease for around five months after drinking milk from a cow with the disease.

The World Organization for Animal Health, OIE, recognized Korea as an “FMD-free country” on Nov. 29, 2002. However, now it looks as if livestock exports will come to a halt because of foot-and-mouth disease.

I look forward to the disease quickly being cleared and Korea being recognized as FMD-free once again.