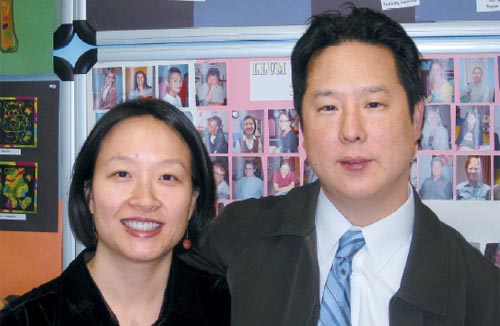 Steven and Mary Park’s families came to the United States from Korea when they were children. Today the two run an acclaimed mentoring center for underserved kids in one of Washington, D.C.’s most crime-ridden neighborhoods. By Choi Sang-yeon


WASHINGTON - Hearing a gunshot is not as rare as it should be in historic Anacostia, a neighborhood in Washington, D.C. known for its high violent crime rate. With average annual income of $8,000 (9.364 million won) per family, Anacostia’s population is 98 percent African-American and 90 percent single-parent households. The college acceptance rate is below 2 percent.

Steven and Mary Park, a Korean-American couple, have worked to improve the lives of children in the neighborhood for 15 years. Steven, 39, has bachelor’s degrees in English and communications from Boston University, while his wife Mary, 34, has a master’s degree in counseling psychology from Columbia University. Steven came to the United States with his family as an immigrant when he was 7 years old, and Mary’s family arrived when she was 6.

During his college years Steven had the chance to help his father, who owned a taekwondo studio in Anacostia. Today, he looks back on that time in his life and said he realizes how selfish he had been. The 1990s were the peak of poverty and violent crime in Anacostia, and abandoned children were neither fed nor clothed properly, Steven said. They were illiterate even with an elementary school education. Steven said those days caused him to reflect on the values of love and mercy.

He had planned to become a journalist, but after seeing the realities of Anacostia, Steven established Little Lights, a philanthropic urban ministry committed to supporting children, after he graduated in 1995. Little Lights offers one-on-one mentoring to around 100 children at a time. Thousands between the ages of 5 and 13 have now gone through the program. Except for Steven and Mary’s children Kayla, 6, and Dylan, 4, all the Little Lights children are African-American.

“About two years ago, when Little Lights closed for a while for spring break, a 5-year-old boy died in front of his house because a whistle got caught in his throat. At that time, his dad fled their home and his mom was arrested for possession and use of illegal drugs. There was no one taking care of that boy,” Steven said in an interview conducted on Dec. 27 at Little Lights. Though the group was officially closed for winter break, three boys and girls still remained.

Mary had been working as a college counselor when she met Steven. “It was the first time I met a Korean-American who practiced the principles of love and mercy in his real life,” she recalled. To Mary, the conditions in Anacostia that Little Lights dealt with came as a shock. As soon as she received her graduate degree, Mary started volunteering there. Three years later, in 2001, the two got married.

The couple said their parents were their biggest supporters of their philanthropic work.

Mary confessed that the family did have to endure hardships to improve their community. “Just recently, we had to help clean up an apartment where the family of one of our students had been fighting with knives, staining it with blood.”

When asked whether they have plans to look for more stable jobs, the couple answered that it is a blessing for them to be able to help children in Anacostia realize their inner potential.

Seeing abandoned kids enter college thanks to their small efforts, the couple said, helps them forget the difficulties they face every day. The two explained that after-school education for underprivileged children eventually leads to better living standards.

Currently there are about 100 volunteers and professional staff at Little Lights, which the Parks have built from scratch.

Last April, Little Lights won the Arnold Keller Jr. Award, which is given annually by the Capitol Hill Community Foundation to a notable organization devoted to the betterment of public society.