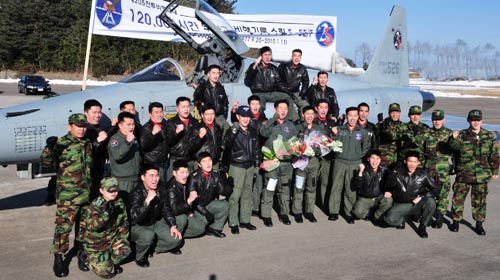 Pilots and other personnel at the Korean Air Force’s 205th Flight Squadron under the 18th Fighter Wing based in Gangneung, Gangwon, celebrate their accomplishment at the base Wednesday. Provided by the Air Force


Captain Oh Dong-uk, 28, a graduate of the Korea Air Force Academy class of 2006, landed his fighter successfully on a runway in Gangneung, Gangwon, Wednesday. Superficially, it was just another flight drill.

Yet when it ended, Oh’s comrades in the Korean Air Force’s 205th Flight Squadron under the 18th Fighter Wing raised a banner behind his plane and rushed to congratulate him.

With Captain Oh’s flight, the 205th had completed 120,000 consecutive hours of flight drills without a single accident, which it says is a new world record for a single squadron with a single fighter type.

The squad is now submitting the figure to Guinness World Records through the Korea Record Institute.

“I am so honored to be the pilot to complete this flight record, which will go down in the history of the Korean Air Force,” Oh said.

The air force is also proud of the milestone, which was completed at the first base in Korea to give its fighter pilots red scarves, a tradition that has since spread across the country.

Since the 205th Flight Squadron was created for advanced pilot training on Sept. 20, 1977, its fighters have flown about 97.2 million kilometers (60.3 billion miles), equivalent to circling the earth 2,432 times or traveling to the moon and back 252 times.

The squadron trained a total of 215 pilots until 1982, when it began drilling for combat situations.

The Gangneung base has a reputation as the toughest place to get accustomed to flying, because of the strong wind coming off the sea nearby.

Climate fluctuations and frequent fog hamper flights, as do seagulls that bother pilots.

Squadron members said it was their “active communication” that eventually helped them overcome such natural obstacles - that is, everyone involved in air operations is constantly talking to each other to prevent mistakes or accidents.

“What we have accomplished today is the result of the combined effort and contribution of all pilots including past seniors,” Lieutenant Colonel Kim Chang-hun, 44, the squadron’s commander, said.

“We will maintain the tradition of making flights free from accidents. We will also keep on improving our combat capabilities in order to win over enemies under any circumstances.”