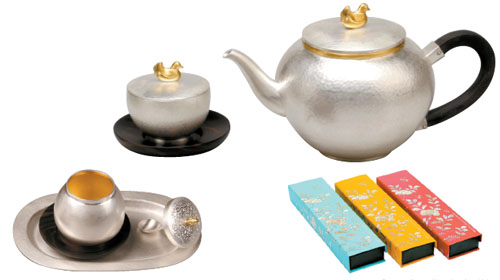 This set of a coffee pot and cups is one of the most popular souvenirs at the National Museum of Korea. It is designed in the style of gilt-bronze art pieces from the Baekje Kingdom (18 B.C.-660); right: Paper pencil case with mother-of-pearl inlay [JoongAng Ilbo]

Not many people go to museums or art galleries just to buy a tea pot or a handbag, but that’s beginning to change. The artfully crafted, limited-edition fashion pieces that have begun cropping up at galleries around Seoul are drawing a new kind of visitor into the art world - the shopper.

The National Museum of Korea is one of the museums that is attracting new visitors by stocking their gift shop with high quality, designer items.

Designer Kim So-ra, who is with the Cultural Foundation of National Museum of Korea, was wearing a set of tumi earrings that she had designed for the museum when the JoongAng Sunday Magazine met with her there earlier in the month.

The earrings, which sell for 9,000 won ($8) a pair, are part of the museum’s efforts to raise the quality of their souvenirs and encourage visitors to purchase gift items from the museum rather than at tourist streets or markets.

The tumi earrings were designed in conjunction with the current exhibition, “The Great Myth and Mystery of Peruvian Civilization: Inca.” A tumi is a ceremonial knife used in some Inca cultures.

“I always design things that I myself would like to wear and to buy,” Kim said.

The foundation’s cultural product team was established in 2005. Prior to that, all of the items in the museum’s store were being sold on commission. In fact, the goods sold in the store were the same as the ones being sold in the tourist neighborhood of Insa-dong and in the back alleys of Namdaemun Market. Most of the products were made by small businesses in China, which made it impossible to manage their quality and gave the souvenirs a cheap look and feel.

The cultural product team’s first task was to come up with a series of products that would reflect the museum’s reputation for quality. But they went through a long process of trial and error. They found it was difficult to set prices for their products because the ones sold in Insa-dong were relatively inexpensive. They also had a hard time looking for a domestic manufacturer because they wanted all of the materials to be made in Korea.

“Most of the domestic sewing factories no longer exist,” said Kang Jeong-eun, a textiles designer. “We could barely find one sewing factory in Daegu to manufacture stuffed dolls for us,” she continued.

There are significant differences between museum souvenirs and the souvenirs available at tourist sights. According to the museum, the items have to be cultural products that embrace Korean culture and history. That’s why the museum’s designers must be familiar with the items in the museum’s collection.

“We believe it’s the designers’ job to make relics into cultural products so that the public will become more familiar with them,” designer Kim So-ra said.

The team’s efforts have paid off. In the past five years, they have developed 1,000 products, for both practical and decorative use, and demand for these products has increased.

In the beginning, the demand for luxurious souvenirs was beyond the team’s expectations. Despite its high price of 120,000 won, one of the most popular souvenirs was a set of coffee cups and saucers designed after the gilt-bronze art pieces of the Baekje Kingdom (18 B.C.?660). 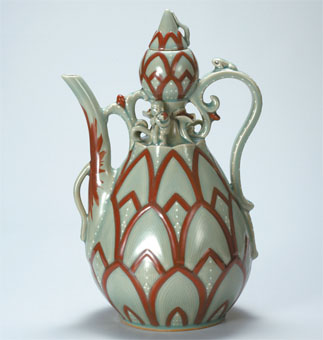 This reproduction of National Treasure No. 133 is popular among foreign shoppers.

These days, “products that successfully combine practical use and tradition are a hit,” said Kim Sun-ah, the museum’s stationery designer. Popular items include a paper pencil case inlaid with a mother of pearl design for 7,000 won, a watch with numbers written in Chinese characters for 22,000 won and a necktie with Korean lettering for 30,000 won, she said.

A wide range of cultural handicrafts are also in great demand. A set of wooden ornaments priced at around 23,000 won and a purse made with traditional fabrics priced at 30,000 won are two of the more popular items.

Word about the quality of the items has spread, which has helped the museum attract new customers.

“Rose-decorated kitchen mittens and aprons [priced at 37,000 won] are also drawing great interest,” designer Kim So-ra said. But in this case, it was not the cultural value of the items that attracted customers. Sales increased when First Lady Kim Yoon-ok was pictured wearing it.

The Samsung Foundation of Culture is developing products in three main categories; delicately-reproduced replicas of the items in their collection and special products manufactured using traditional materials and techniques. All of these items are produced in small quantities and sold as limited edition pieces. The museum produces new items twice a year, supplying them to galleries such as the Leeum Samsung Museum of Art in Yongsan, Ho-Am Art Museum in Yongin City and Rodin Gallery in Taepyeongro 2-ga, central Seoul.

The foundation produces around 200 textiles and accessories, around 100 different metal pieces, about 60 pieces of celadon and pottery and up to 20 prints or pieces of sculpture.

The foundation’s most expensive product is an imitation of National Treasure No. 220, a celadon-covered bowl with a tray stand and bronze ladle that is priced at three million won. A lid with a knob resembling a squirrel fits perfectly into a bowl with a groove that is designed to hold a spoon and chopsticks. The exterior is engraved with an image of a phoenix and a dragon.

Another product gaining attention is a reproduction of National Treasure No. 133, a porcelain tea kettle in the shape of a lotus blossom that is priced at 2.5 million won. The frog sitting on the handle adds a whimsical touch.

“The porcelain tea kettle is especially popular among foreign VIPs,” said Kim Jung-yeol, marketing director of the Samsung Foundation of Culture. The item has been popular for the past 20 years, he added.

According to the foundation, items made with mother-of-pearl inlay and ceramics are most popular among foreigners, while neckties and scarves are a hit among domestic consumers.

One necktie is made with gold and silk thread and features an image of a gayageum, a traditional Korean string instrument.

The foundation has also created commercial products such as handkerchiefs, plates and wallets based on pieces by international artists including French sculptor Louise Bourgeois and Japanese pop artist Yoshimoto Nara as well as works by renowned domestic artists.

Last year, the Samsung Foundation of Culture launched a collaborative project with the Samsung Art and Design Institute to produce commercial products based on the designs of five artists. One of these pieces, “Peanut Golf Ball Holder,” a silicon holder shaped like a half open peanut shell designed by Choi Jung-keun, is perfect for storing extra golf balls when going out for a round. It is available at the Leeum Samsung Museum of Art. 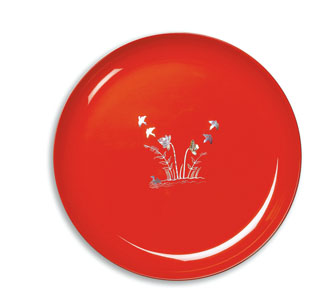 The foundation is hoping to expand the project in the coming months.

“Starting this year, we will meet with SADI students to develop new products,” Park Dain, the manager and a designer of Samsung Foundation of Culture, said.