See Korea through the eyes of the rich and famous

See Korea through the eyes of the rich and famous 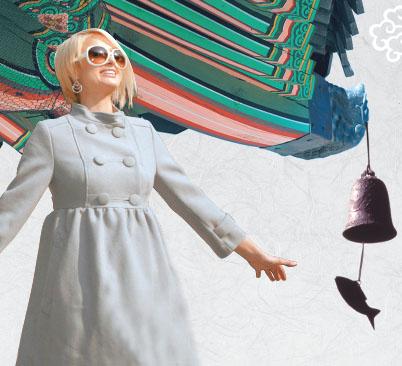 Paris Hilton visited Korea House in 2007. The restaurant is a popular destination for foreign VIPs.[JoongAng Ilbo]

The water has to be Evian. The car has to be bullet-proof. All of the towels have to be white.

As with many things in life, the more challenging something is, the more rewarding it is. That seems to be the perfect way to sum up the art of arranging visits for foreign VIPs.

The challenge is that every second and every footstep counts in the schedules of these luminaries, who more often than not represent a country, an industry or even an era. The reward? A chance to get up close and personal with influential people in the political, business and cultural arenas.

In recent months, Korea has seen a flood of high-profile visits by powerful foreign dignitaries, such as U.S. President Barack Obama and Japanese Prime Minister Yukio Hatoyama, as well as famous celebrities, including actors Tom Cruise and Hugh Jackman and actress Sophie Marceau.

There has also been a string of business moguls, millionaires and billionaires from regions like the Middle East, who have visited the country, most notably, Khalid A. Al-Falih, the president and CEO of Saudi Aramco, which was the world’s largest oil company in the second half of last year. In a typical five-day visit to Seoul, many of these visitors were reported to have spent about 30 million won ($26,700). That’s more than the annual salary of the average entry-level worker in Korea, who makes about 27 million won a year, according to a recent survey by Incruit, a local recruiting information provider.

What’s more interesting is that, according to industry observers, the global economic recession has not reduced the number of high-profile visits by foreign bigwigs. 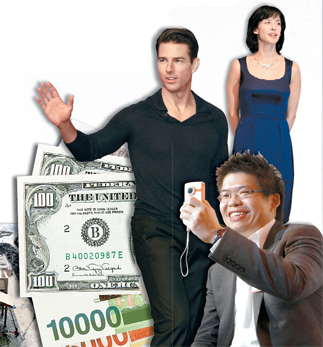 “Although the size and scale of the reception that foreign VVIPs receive has decreased [compared to when the program started], the number of such visits appears to be increasing,” Jung Myung-jin, the president and general manager of Cosmojin Tour, a local agency said, referring to the people who are known in Korea as “Very Very Important Persons.”

Jung has been arranging tours for foreign dignitaries for 10 years now. Her company, Cosmojin Tour, is one of the few tour agencies in Korea specializing in visits by famous foreigners. They have handled the visits of about 2,500 A-list clients so far, including filmmaker Woody Allen and model Cindy Crawford, as well as Charles Goodyear, former CEO of BHP Billiton, the world’s largest mining company. And the agency claims to have enjoyed an average of 30 percent growth every year since it opened in 2001.

So one might wonder: Where do these “VVIPs” go, sleep and eat? After all, not all of us may be big shots but we can follow in their footsteps.

Industry sources say that because foreign dignitaries’ schedules tend to be organized around a specific mission - to attend a summit meeting, sign a deal, promote a film or perhaps perform - the visitors only have a limited time for sightseeing or entertainment.

This is especially true for high-ranking government officials, according to Ra Yoo-jin, an official at the Protocol Planning and Coordination Division of the Ministry of Foreign Affairs and Trade.

But there are cases in which protocol officers are engaged to entertain the spouses or members of a VIP’s entourage by taking them to tourist destinations.

According to sources at the Foreign Ministry, when Senegalese President Abdoulaye Wade visited Korea in November, the members of his entourage were taken to Namdaemun and other shopping districts for a gadget shopping spree. And when Tanzanian Prime Minister Mizengo Pinda visited the country in September, his wife Tunu Pinda was treated to a tour of Gyeongbok Palace in downtown Seoul on a Tuesday, which is a day of the week when the palace is closed.

In fact, as a tourist site for foreign VIPs, you can’t really go wrong with a Korean palace, industry observers say.

“We usually take our VVIPs to Gyeongbok or Changdeok Palace,” says Kim Seong-jin, who has been a tour guide since 2005, serving more than 200 foreign dignitaries during that time. “A Korean palace is a rare tourist destination where you can appreciate both architectural and natural beauty.”

Kim shared with the JoongAng Daily a recent experience she had with Al-Falih, of Saudi Aramco. Kim took Al-Falih to Gyeongbok Palace last month in the midst of his tightly-scheduled itinerary. He told her that he “wished to stay at the palace all day long and stroll around like the kings used to.”

In fact, when Chief Justice of the Supreme Court of Denmark Torben Melchior came here in October 2008, he was said to have been so captivated by the beauty of Gyeongbok Palace that he cancelled his schedule for the rest of the day to spend more time there.

For Hollywood celebrities and pop stars, however, it’s not just a limited schedule, but also fame and a reluctance to be in the public eye that have kept them from touring the city freely. 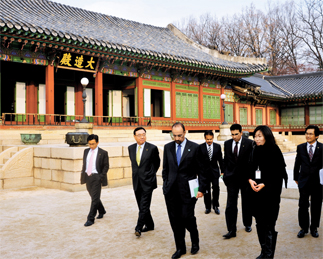 Khalid A. Al-Falih of Saudi Aramco went on a tour of Gyeongbok Palace last month. Provided by Cosmojin Tour

“Oftentimes, celebrities just end up staying in their hotel,” says Shirley Hong, a PR manager at Yellow 9, a local pop concert organizer. “In some cases, newer or lesser-known musicians have visited Insa-dong or COEX mall, but the truth is the more famous they are, the more low-key their visits are.”

According to industry insiders, high-profile out-of-town visitors usually prefer to stay at the Shilla Hotel, where a presidential suite costs around 10 million won a night, because its location on Mount Namsan makes it easier to provide security. Some also stay at the Grand Hyatt Hotel, which has presidential suites for around 8 million won, for its view of the Han River.

Guests at these hotels are often treated to customized services. For example, when Al-Waleed bin Talal, a Saudi Arabian prince, stayed at the Shilla in 1999, they replaced the Bible with the Koran and adjusted the carpet so that it faced in the direction of Mecca, Shilla officials reported. And when Anthony Quinn (1915-2001), the Mexican-American actor, stayed at the Shilla in 1998, hotel officials sold him and his wife a folding screen with a traditional embroidered pattern that had hung on his wall, as per their request.

But the trickiest aspect of making arrangements for VIPs, industry sources say, is the food. Although good food can provide a person with a great deal of inspiration, its effects can also be pretty disastrous if something isn’t right, they say.

“Food is often the most convenient means by which Korean culture is experienced, so we try to schedule at least one large Korean feast for each visitor,” says Moon Chun-sang, a program officer at the Asia Foundation. 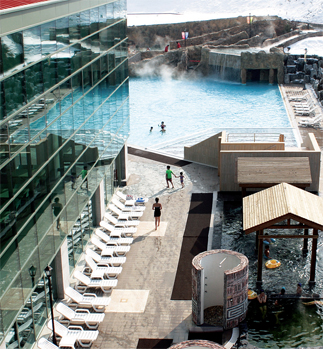 Officials at the organization often take their dignitaries to Korea House in Jung District, northern Seoul. The venue is known for its historic architecture, which often serves as the backdrop for photo opportunities, and performances of traditional Korean music and dance. Korea House was built in 1980, and was modeled after a structure in the Gyeongbok Palace compound.

Another favorite restaurant for entertaining high-profile guests is Samcheonggak. Located on Mount Bugak in the Seongbuk District, Samcheonggak opened in 1972 as a yojeong, or upscale gentlemen’s club, and was frequented by powerful figures in the 1970s and ’90s. It reopened as a Korean restaurant and performance venue in 2001, hosting visitors such as Berlin Philharmonic conductor Simon Rattle, German rock band the Scorpions, Queen Elizabeth II of the United Kingdom and Hungarian President Laszlo Solyom, among others.

“President Solyom described the food as ‘wonderful,’ adding that he was especially pleased that he could enjoy the beautiful scenery and a traditional performance at the same time,” said Kim Hwa-kyoung, a marketing manager at the restaurant.

Location - be it a palace, hotel or restaurant, may be important - but industry insiders say the key is gaining the visitor’s trust in the service, and in a larger sense, the country.

Arumdaun Nara, or Anacli, a hospital that specializes in plastic surgery and skin care, is one of the hot spots for wealthy dignitaries from China, Russia and Kazakhstan. According to officials there, a client who is a CEO at a large insurance company in China gained such confidence in Korea’s cosmetics technology that his company signed a memorandum of understanding with a medical university in Korea afterward.

“I believe that what I do contributes to creating trust and credibility for companies in Korea, as well as the country itself,” said Kim Seong-jin, the tour guide. “That gives me a sense of pride in my work.”


*These sights were part of a seven-day tour organized for a group of eight Chinese dignitaries. The cost of the tour was about 20 million won per person.