Bringing down the walls in China

Bringing down the walls in China 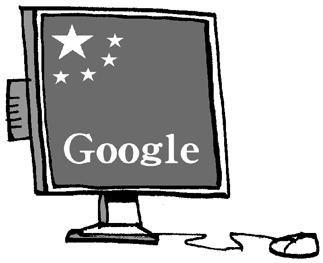 Google has announced it would pull out of China, but the battle between Google and China is not yet over.

The primary reason for Google’s threat to withdraw is that the Chinese government tried to attack Google’s computer systems, but analysts say the real reason was China’s grip on Internet services in that country.

But the consequences for Google are likely to be minimal, even if the Internet giant does pull out of China completely.

Although the decision to leave China, whose Internet industry is worth 7 billion yuan ($1.03 billion, 1.15 trillion won), would be a bold one, it is not likely to cause the company much damage. In 2009, Google’s market share in China was only 10 percent, while the Chinese portal Baidu (http://baidu.com) had 70 percent. The Chinese market, meanwhile, provides Google with less than 1 percent of its total sales.

This would make it seem that the Chinese government is the one with the most to lose, at least in terms of image. China has solidified its position as one of the G-2 powers, and it will not be beneficial for the country to show the world that government censorship is still strong.

Moreover, the incident will provide other Internet service providers with the chance to complain that they suffered similar damage at the hand of the Chinese government in the past.

Of course, Google is not always on the right side. Rupert Murdoch and other media moguls have openly criticized Google as a thief that steals news. At the end of last year, a French court ruled that Google’s electronic book project violated the copyrights of many writers and ordered it to pay 300,000 euros ($431,000, 484 million won) in compensation. In this way, the free flow of information for which Google advocates is in conflict with copyright protections.

The world’s attention is focused on whether Google’s threat will have an impact on China, and force it to relax its policies to accommodate foreign Internet service providers. Although the Chinese call their security system the Golden Shield Project, it has become known to the rest of the world as the “Great Firewall of China.”

For 2,000 years, the Chinese tried to protect themselves from invasions by northern tribes by restructuring the Great Wall, but approximately once in every 200 years the tribes broke through the wall and the Chinese were forced to submit to their rule.

I wonder whether China can continue to suppress the desire of their own people for more information, even if the Great Firewall does succeed in protecting them from foreign influence.