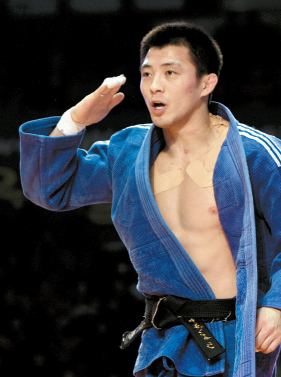 On the first day of the Suwon World Masters 2010 event on Saturday, Wang Ki-chun’s winning streak came to an unexpected stop at 53 matches and Bang Gui-man came out on top in the -73 kilogram division.

Before the start of the tourney, all the focus had been on Wang, the top ranked judoka in the -73 kg division. Having won a silver medal at the 2008 Beijing Olympics, the two-time world champ was undefeated last year in 52 matches and set a new Korean record for most consecutive wins.

At this year’s event, Wang, a Yong In University student, won his first match over Mohamed Riad of France but was ousted in the second round by Yasuhiro Awano of Japan.

Meanwhile, Bang Gui-man, ranked fourth in the world, beat Awano in the semifinals before defeating eighth-ranked Gilles Bonhomme of France on a uchi mata sukashi, a counter technique, by way of ippon or a decisive point that wins a match.

Bang, 27, who is now serving his mandatory military service with the Korea Armed Forces Athletic Corps, celebrated his win by saluting the crowd before stepping off the mat.

“It wasn’t easy always finishing in second place but after today, I hope to keep winning,” Bang said in a post-match interview. “European judoka are strong and it was a difficult match but I’ve been doing well and was confident about my chances today.”

Despite his age, Bang is a relative newcomer to the -73 kg division. He had competed in the -66 kg division until March last year but had difficulty keeping his weight down and made the bold decision to move into what is widely considered the toughest weight division in Korea.

In that division, Wang is currently ranked first, but prior to that the first place holder was Lee Won-hee, a 2004 Athens Olympics gold medalist. Bejing Olympics silver medalist Kim Jae-bum, who is ranked second in the -81 kg division, even moved up a weight class to avoid competing with Lee and Wang in the -73 kg division.

Although Bang has shown plenty of potential in his new weight class, he had failed to win an event until last October, when he won the 2009 World Cup in Ulan Bator, Mongolia. He also won the 2009 Grand Prix in Qingdao, China, in November.

On the first day of action in Suwon, Kong Ja-young lost to Yoshie Ueno of Japan in the women’s -63 kg division finals, leaving Bang as the lone Korean gold medalist. The Japanese female judoka swept through their competition as Haruna Asami (-48 kg), Misato Nakamura (-52 kg) and Kaori Matsumoto (-57 kg) took the top places on the podium.