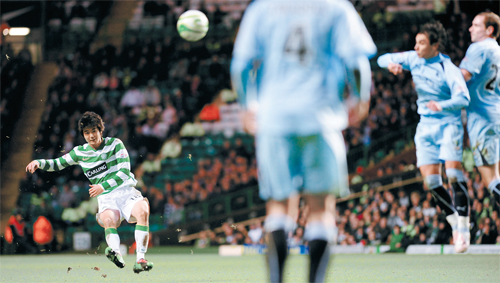 The 20-year-old Ki played a solid game in front of the home crowd at Celtic Park in Glasgow, Scotland, and earned the Man of the Match honor, but suffered an injury to his right ankle that will bench him for two weeks.

Ki reached a deal with Celtic in late August of last year and joined the team at the end of the K-League season in December. He was to have played his debut match for Celtic earlier this month but the date was pushed back due to snow and a delayed transfer consent form. In his first match, Ki got the start and played the entire 90 minutes as the team’s defensive midfielder, helping his club tie Falkirk in a 1-1 draw on home ground.

It didn’t take long for Ki to make an impression on Celtic fans. Thirteen minutes into the match, his right-footed free kick from just outside the box was headed wide by teammate Marc-Antoine Fortune. Falkirk were able to score the opening goal on poor defending by the home team when Carl Finnigan drilled a shot past Artur Boruc in the 19th minute. Then in the 40th minute Celtic’s Georgios Samaras managed to tie the match. Celtic desperately tried to win by pressuring their opponents in the second half, but in the 66th minute, Ki’s free kick from 30 meters (98 feet) out was blocked by Falkirk goalkeeper Robert Olejnik.

“Ki is in the squad and has shown up well so far,” Celtic manager, Tony Mowbray was quoted as saying on the Celtic Web site. “He’s a young guy, only 20, and I don’t want to put too much pressure on him.

“He’s coming to the other side of the world and will have to adapt to a new style of football, but Ki will be involved over the next few weeks. We will be utilizing the squad and Ki is a part of that.”

Ki failed to score or assist on a goal but he took many of the team’s free kicks and corner kicks during the match, showcasing some of the threatening kicks that Korean football fans have come to expect from the young midfielder.

Ki went down with an ankle injury after a challenge from Colin Healy in the 85th minute. He was able to play the rest of the match but is expected to miss about two weeks of play. He is likely to be sidelined for the next two matches but will return for the league match against Hibernian on Jan. 28.

“There was quite a bit of swelling in his right ankle, and we had him ice the ankle after the match. The team doctor has ruled him out for about two weeks,” stated Ki’s father, Ki Young-wook. “Other than the injury, it was a good debut match. He passed well and received cheers from the home crowd on three or four occasions.”

For Celtic, it was a disappointing match. It was the first time the team had given up a point to Falkirk on home ground since 1987. Considering that Falkirk is ranked last in the 12 club league, the tie was difficult for the team to take.

On the same day, the Glasgow Rangers defeated the Hamilton Academicals, 1-0, widening their lead over their rival Celtic by nine points in the league standings. Celtic is now second in the league standings with a record of 11 wins, five draws and three losses. Falkirk, on the other hand, is trying to stave off a demotion from the SPL at the end of the season with a record of two wins, seven draws and nine losses.