[Viewpoint] A pitch to play hardball with France

[Viewpoint] A pitch to play hardball with France 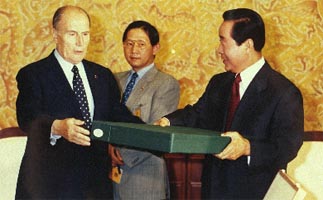 French President Francois Mitterand brought a case containing one of the Oe-kyujanggak manuscripts to Seoul in 1993 to show it to Korean President Kim Young-sam. Provided by the Blue House

France tends to turn up its nose when it comes to restitution.

South Koreans, the president included, have received the cold shoulder from France for the last two decades whenever they raised the issue of the restoration of the Oe-kyujanggak, or royal archives, manuscripts stored at the Bibliotheque Nationale de France.

The documents were taken in 1886, when Admiral Roze of the French Far East Navy, then based in China, invaded Kanghwa Island near Seoul in retaliation for the persecution of French Catholic missionaries by the Korean Government. Roze pillaged 340 volumes of rare official protocols of the Joseon dynasty. In 1991, Seoul National University raised the issue of their repatriation, and bringing home the confiscated royal documents has since become an important diplomatic issue between France and Korea.

A French court recently dismissed an administrative suit by a South Korean civic group that demanded the restoration of the the Oe-kyujanggak manuscripts. The court ruled that the relics are now French property, regardless of how they came into French hands. Hundreds of volumes of Joseon Dynasty royal books and manuscripts are preserved at the National Library of France.

France has been playing a cat-and-mouse game with the historic relics ever since Korea became a player in high-speed railway technology in early 1990s.

In a visit to Seoul in 1993, French President Francois Mitterand brought a case containing one of the manuscripts to show to his Korean counterpart, President Kim Young-sam. President Kim in his diary recorded that France had promised to finally restore the royal documents.

Seoul then rewarded France’s TGV with a multibillion-dollar contract to supply the high-tech train technology. With the deal in their pocket, the French went back on their high horse. They had taken the Korean government for a fool, former presidential aides recalled.

“We Koreans are sensitive about ‘eat and run’ business practices,” he told her. “We felt the French have circumvented us, using the royal text as bait to win the TGV deal. The court ruling brings back bad memories.”

The French have outwitted the Koreans more than once.

The French consortium Eurocopter beat the United States’ Bell to win a 5.45 trillion won ($4.85 billion) contract to run Korea’s ambitious helicopter project. It was unprecedented for a European company to outbid an American builder on a multibillion-dollar defense project.

But while the Roh Moo-hyun administration was close with the French government, the goodwill proved one-sided.

The French snubbed Korea when Yeosu bid to host an international exposition in 2007, instead supporting competitor Morocco. The move prompted politicians and entrepreneurs to storm the Paris conference.

“Our chances had slimmed due to France’s interference. We were hurt and outraged because it was shortly after they earned big money from the chopper deal,” one member of the city hosting committee recalled.

France has long been a master of deliberate and shrewd diplomacy.

It makes the most of its cultural heritage to reap whatever it can on the diplomatic front. It puts on airs and capitalizes on anti-American sentiment, an old habit from the imperial days.

We need to apply this kind of strong business mentality to bring home our historical relics.

The bold game played by the Chun Doo Hwan administration provides a good lesson. Long-term lease is a bad idea, and Paris has lost its justification for refusing our restitution demands.

Last year, France returned to Egypt some stolen relics that had been stored in the Louvre. The country no longer can maintain its argument that if it returns the Korean texts, it will open itself to endless other restitution demands.

Korea is sensitive on disputes on cultural heritage. The younger generation bears antipathy towards China after it distorted ancient Goguryeo history.

The French have long bruised the pride of the Koreans. If it keeps this up, Koreans will snub French wine and make a pitch for Boeing instead of Airbus.

France will soon face a choice: lose its ill-gotten gains, or stand to lose its economic profits.

*The writer is the executive editor of the JoongAng Ilbo.