Left: The Seoul Metropolitan Government has been urging public and private parking lots to designate women-only spaces since April 2009. This year, the city hopes to increase that number. Provided by Seoul Foundation of Women and Family
Right: Intercity busses in Gyeonggi Province have seats specifically for female travelers. Provided by Gyeonggi Provincial Government


Ladies come first in many parts of our society. We now have loans, credit cards, classes, gyms and spas open only to women. A local pizza franchise even advertised a pizza as being “for ladies only.” There is more: a local hotel chain has a women’s floor exclusively for female guests and bars often host ladies’ nights for promotional purposes. The ladies-only list is endless.

These marketing strategies have been accepted as a surefire way to draw women. 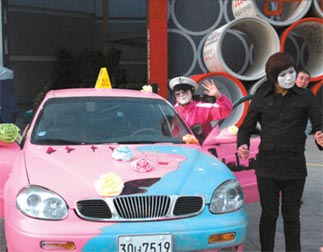 Members of the women’s rights group IF stage a demonstration urging the Seoul city government to launch pink taxis for women, last October near City Hall, central Seoul. Provided by IF

But with an increase in awareness about women’s safety, spurred by a series of crimes against women in the last year, state and local governments have initiated their own campaigns to make the city safer for women. The campaigns create spaces for women at bus stops, on buses, in parking lots and on taxis and are identified by the color pink.

The bus stops were designed to prevent women from being exposed to potential crimes that could occur at bus stops in less-crowded areas.

“The Kang Ho-sun case inspired us to come up with this idea,” said Lee Byung-wook, an employee who is in charge of the women-only bus stop service.

Kang is a serial killer who shook the nation when he confessed to raping and murdering eight women and it was found that he killed another two, his fourth wife and mother-in-law. He kidnapped some of his victims late at night at bus stops on the outskirts of Seoul.

Currently, there are 16 buses participating in the Safety Bus Stops for Women service across Seoul. The stops are located between regular stops and let passengers off after 11 p.m.

In order to use the service, a female passenger can tell her bus driver that she wants to get off at one of the stops. Although the service was created for women, anyone concerned about their safety can use it, including people who are physically challenged, the elderly and even male passengers.

Earlier this month, the bus policy division conducted a survey to find out if people are using the service and whether more stops should be added. 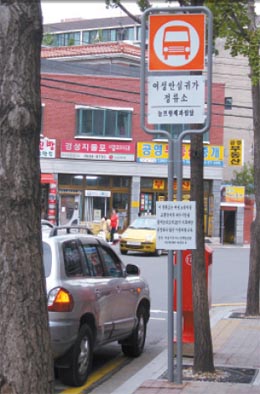 Seoul plans to increase the number of “Safety Bus Stop for Women,” such as this one in the Yangcheon District, western Seoul.Provided by the Seoul Metropolitan Government

“Based on the survey results, we’ll decide whether to expand the number of Safety Bus Stops for Women this year,” Lee said. “Not many people use the service, but we are definitely getting positive feedback from female passengers.”

Meanwhile, Gyeonggi designated pink zones on 53 intercity buses in June 2008 for women who might feel uncomfortable sitting next to male passengers during long journeys. Of the 38 seats on the bus, six are designated for women and are covered with hot pink fabrics.

There is a similar system in downtown Seoul with pink seats reserved for pregnant women.

In another attempt to raise awareness about women’s safety, the Seoul city government has also created women-only parking lots, because parking lots often become the site of crimes against women.

A set of guidelines distributed by the Seoul city government recommend that parking lots with a capacity of 30 cars or more allocate at least 20 percent of its spots for women. The spaces must be located within 30 meters (98 feet) of emergency exits or elevators. CCTVs must be installed in the vicinity and the lights in the area should have a brightness that is between 130 and 200 lux. The parking spaces are designated by pink lines and female pictographs.

Men are not penalized for parking in the pink spaces, but they may get some inquisitive stares from those around them.

“We don’t impose fines on males [who use the women-only spots]. If we did, it would be a form of reverse discrimination against men,” said Han Mi-ae, the Seoul city official who is responsible for the pink parking lot program. “But what we want is for the spaces be given to ladies first.”

It may, however, take time for people to become accustomed to the idea.

On a recent visit to a big-box store in Chang-dong, northern Seoul, Jang Yong-seok, man in his 40s, was parking his van in one of the pink spots.

When asked why he parked in the pink zone, he replied, “I don’t understand why women need their own places at a packed discount chain like this. Women have more parking spaces than the disabled, as you can see here,” he noted, pointing to the parking spaces for disabled drivers.

Last month, the central government revised the taxi law to allow taxi companies to offer a broader range of services, including taxis only for women. It will go into effect between May and June.

The law was revised after women’s rights groups such as IF, the Korea Sexual Violence Relief Center and the Unni Network pushed the Seoul city government to bring a “pink taxi” service to Seoul. Part of their argument was that other countries such as Russia, Britain, Iran and Mexico have already initiated similar services. Pink taxies are operated by female drivers, for female passengers.

But the Seoul Private Taxi Association and the Seoul city government objected, saying that a pink taxi service could give people the impression that all male taxi drivers are potential criminals. They also said the pink taxi service is not lucrative.

“Let’s say you’re a taxi driver. Do you think you could make a living if you only take female passengers?” said Yu Byung-cheol, an employee with the public transportation division of the Ministry of Land, Transportation and Maritime Affairs.

Meanwhile, a representative from the taxi association said that of its 50,000 registered members, only 416 are female, meaning there are not enough women to drive pink taxis. And many female taxi drivers decline to work late at night because they want to avoid drunken male passengers, the representative said.

Yu suggested that the city’s existing “call taxi” service could do the job of a pink taxi system. With the call taxi service, passengers can request that their driver send a text message to a designated acquaintance with information such as the taxi driver’s name, the taxi’s license plate number and the pick up location.

Before the law revision was passed, any taxi company, whether large or small, could offer a call taxi service. After the law revision is implemented, taxi companies will have to meet certain requirements in order to be licensed to provide the service, Yu said.

“In other words, the call taxi service is trustworthy even if they are run by male drivers,” he said.

Under the revised law, companies will need a fleet of at least 5,000 cabs and a dispatch system, and they must provide sensitivity training for their drivers.

Although the National Police Agency says it has no data on crimes against women committed in taxis, taxi crimes frequently make headlines.

Last October, a 32-year-old taxi driver identified by his surname Kim was arrested for sexually harassing several female passengers. Evidence uncovered at the scene revealed that he had taken pictures of their private parts with his digital camera. Similar taxi crimes were reported in Busan, Gwangju and on Jeju Island throughout the year.

Women’s rights groups and activists have mixed views on the efforts to create spaces that are women-only.

“I’m glad that this society is trying to build a stronger social safety net because it will help women in some ways. But I’m worried that places like these could result in women being labeled as fragile or could make people think of women in a fixed way,” said Kim Du-na, who works at the Korea Sexual Violence Relief Center.

Cho Young-mi, a researcher at the Seoul Foundation of Women and Family, agrees.

“We have to think about what ‘women-only’ means to us,” Cho said. “It’s good to ask for more rights for women in this city, but these women-only spaces could end up marginalizing women in the end.”

The subway cars for women only is one good example to consider, she says. The cars protect women, she says, but are a temporary solution. Without a long-term solution, “Pushing women into one place and letting them avoid possible threats from potential criminals is not done for the sake of women, but is separation,” she said.

Two years ago, the Seoul Metropolitan Rapid Transit Corporation, which manages subway lines 5 to 8, designated a number of women-only subway cars in an attempt to reduce the number of sexual crimes against women in the subway system, but it reversed the policy after fierce opposition from women and women’s rights groups. Women-only subway cars were first installed on subway trains in December 1992, but they didn’t work: men and women kept ignoring the “women-only” signs.

Eom Ul-soon, the head of feminist group IF, sees it differently.

The group has been urging the Seoul city government to initiate a pink taxi service for the past five years.

“I don’t think these pink spaces brand women as weak or women as people who need to be protected,” she said. “We all know that men and women are physically different. Very different. No matter how many muscles you build, a woman can’t beat up a man, especially when they are together in a taxi late at night. There are also different criteria for men and women in sports. In some situations, we need spaces that are for women-only.”