Despres goes from pauper to prince

Despres goes from pauper to prince 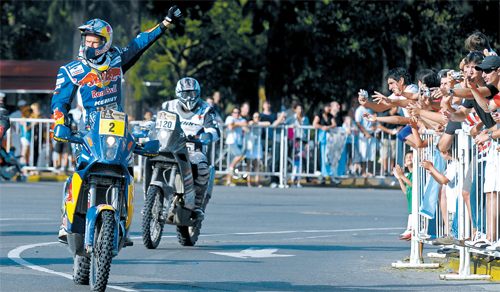 Frenchman Cyril Despres, left, rides his KTM motorcycle upon arrival to the Parc Ferme and win the 2010 Dakar Rally in Buenos Aires on January 16. [AFP]

BUENOS AIRES - Only 10 years ago Frenchman Cyril Despres was so impoverished that his phone had been cut off. Here on Saturday he joined an elite group of men who have won three Dakar Rally motorcycling titles.

The KTM rider dominated the race from start to finish, helped considerably by the six-hour penalty meted out to main rival Marc Coma last weekend for illegally changing a wheel. It was something he could barely have dreamt about when he was a garage mechanic in Paris fixing other people’s bikes in 1998, having spent all his money on competing in the Rally of Tunisia, where he finished 13th. His first Dakar appearance in 2000 resulted in a 16th-place finish but BMW was looking for a support rider who was also a qualified mechanic.

“I didn’t have a penny, I had invested everything,” confessed Des-pres, who celebrates his 36th birthday on Jan. 24. “They [BMW] called me on a friend’s line. It was only a small contract, but I jumped at the chance,” added Despres, who is based in Andorra, where his girlfriend resides.

It was a dream come true for Despres, who had been bitten by the bug of motorcycling as a schoolboy and had competed in his first moto-trial at 13, inspired by a friend who had already taken it up.

Since then he has not only accrued three Dakars but also two world championship titles in this most demanding of rallying challenges, although he is well aware of the frustrations that can cost you a race.

“You have to have a full pack of cards to win the Dakar,” said Des-pres, who lost out on the 2009 crown on the first stage when a problem with his tires cost him 40 minutes. “Speed is not the primary card you require. You have to draw up a list of what not to do. How to avoid losing 15 minutes on navigational problems, speeding penalties .?.?. There are so many details to put together that when they are it is the size of a book,” he said.

For Despres, winning the Dakar for the third time means establishing his name in the history of the race. “Winning the toughest race in the world will bring me recognition from my peers,” he said. AFP